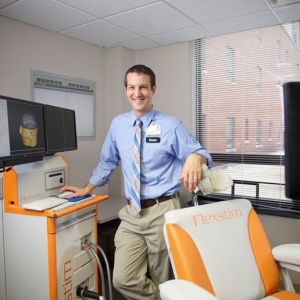 Aaron Boes, who earned his MD and PhD from the University of Iowa in 2009, remembers his scientific career taking off as a doctoral student in the UI’s Neuroscience Interdisciplinary Graduate Program.

Working in Professor Peg Nopoulos’s laboratory, Boes learned the importance of asking the right scientific questions, performing statistical analyses, interpreting results, and writing up the results in a manuscript.

“My time at Iowa was the foundation for learning how to do research,” says Boes, who was a student in the UI’s Medical Scientist Training Program. “It was really through the neuroscience graduate program where I learned how to do science. Those skills are being put to use pretty much every day now.”

Boes is applying those lessons learned to his mentoring of students in his new laboratory at the UI. The Emmetsburg, Iowa, native is an assistant professor in the departments of pediatrics, neurology, and psychiatry. He also is a faculty member in the neuroscience program. His research combines neuroimaging and noninvasive brain stimulation in an attempt to improve treatment for depression and develop new brain stimulation treatments for disorders such as Schizophrenia and Bipolar disorder.

Generally speaking, students rotate through Boes’s laboratory for two to six months. Despite their short time together, he challenges his students to hit the ground running in their graduate careers.

“I give them a topic that’s focused enough to actually achieve results, and then think about those results and write them up,” Boes says. “I’m aiming for a student to publish a paper while rotating in my lab. That would be the goal, albeit an optimistic one.”

In his lab, Boes fosters interdisciplinary, collaborative research across campus. He was first exposed to the benefits of collaboration as a graduate student at the UI, and that was a big reason why he returned to his native state from Harvard University, where he served as a pediatric neurologist at Massachusetts General Hospital.

“You don’t have a strong sense of division at the University of Iowa. People are commonly collaborating across departments,” he says. “That’s allowed our lab to do something really unique that doesn’t happen at other places. We’re the only place in world that does transcranial magnetic stimulation (TMS) in neurosurgical patients with intracranial electrodes, allowing a unique view into the effects of TMS in the brain that we hope to translate into better therapies.”

Boes’s research career is closely aligned with his clinical activities, where he directs the UI Noninvasive Brain Stimulation clinical program. Patients who have medication-resistant depression receive TMS five times a week for four to six weeks. After treatment, about 30 percent of patients experience full remission, while an additional 25 percent have a good response, but don’t quite reach full remission.

Through ongoing research, Boes is optimistic these numbers will continue to improve.