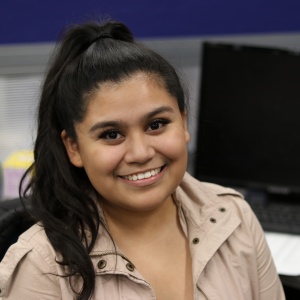 Getting accepted to the University of Iowa was the beginning of many “firsts” for Ana Arzate and her family. As a first-generation college student, attending college meant taking a new path no one in her family had taken before. She earned a Bachelor of Arts in French and International Studies in 2017.

While Arzate was eager to realize her dream of attending the UI, there was a feeling of apprehension about leaving home. For as long as she could remember, Arzate had always been surrounded by a strong sense of community—both in West Liberty, Iowa, and then later in Muscatine, Iowa. Leaving home to advance her education also meant leaving a close-knit group of family members and friends.

“I felt a little lost at the beginning,” she says. “As the first in my family to go to college, I didn’t have a lot of people to go to for help and advice.”

Even so, she held fast to her dream and began her freshman year. By the end of that year, Arzate realized she had actually built a new community—one filled with friends from Currier Residence Hall, classmates, symphony band members (Arzate played the clarinet), and professors.

As time progressed, she felt ready for another “first”—a summer internship in Paris, France, with IES Internships, made possible with a prestigious Benjamin A. Gilman scholarship. She lived with a host family and worked at Archive Valley, a multinational online company that digitally connects people with archive resources from around the world. Arzate experienced living in a major global city, learned to use the Paris Métro, and was immersed in Parisian culture.

When Arzate received her UI degree in 2017, it was not only a milestone in her life—but also a “first” in her family’s history. “It meant breaking the cycle of educational disadvantage, especially to her mother. She is the one who took the first step outside of this cycle which led to me being able to graduate from college,” Arzate says. “Because of this, I am reminded of what it means to hold a degree in higher education—all because of my mother’s integrity.”

Arzate landed a job at Channel Fusion, a global marketing and advertising company with an impressive portfolio of multinational companies such as General Mills, Kimberly Clark, and Schneider Electric. Based in Hiawatha, Iowa, Channel Fusion helps to promote their clients’ brand, products, and services through channel marketing practices to drive localized demand.

As a bilingual client relationship associate, Arzate provides quality services and support in English, Spanish, and French in co-op marketing to her corporate client’s dealer network in North America (U.S. and Canada), Europe (Spain and France), and now the APAC region (Australia and New Zealand). In many ways, she feels that her internship in Paris helped to make her a competitive candidate for her role at Channel Fusion.

Arzate is once again cultivating friendships in her new surroundings.

“When I first moved here, I did not know anyone. Through my job, I’ve grown closer to my co-workers who have helped cultivate my sense of community in the Cedar Rapids area,” she says. “I enjoy living in Iowa. There is diversity here. There are professional opportunities here. It’s home for me.”