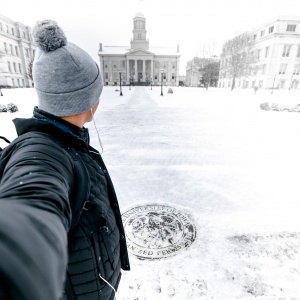 Andrew Broderick set his sights on the University of Iowa from an early age.

“Growing up in the small town of Baxter, Iowa, my goal was to attend the ‘big’ University of Iowa,” says Broderick.

The UI became even more appealing to Broderick as he discovered an interest in the field of physical therapy during high school. The program is currently ranked No. 6 in the country by U.S. News & World Report.

“Chris was very motivational and encouraging. He talked with me about the UI physical therapy program and my interest in the field,” he says. “I hope to emulate Chris as a future physical therapist. I want to work in sports medicine to help athletes who have had significant injuries get back to the level they were performing at—or better.”

During his first campus visit, Broderick not only toured campus as a prospective undergraduate student—he was also able to meet one-on-one with a physical therapy faculty member. He felt inspired by the diversity of opportunities offered to undergraduate students at the UI, as well as by the tight-knit feeling of the physical therapy program. Additionally, Broderick was moved by the beauty of campus and sensed opportunities to hone his photography skills with subjects such as the Old Capitol Building and the Pentacrest.

“My dad didn’t get a chance to travel very much, so he encouraged me to check out study abroad,” he says.

That encouragement led to a semester at the University of Newcastle in Australia, where he was able to complete credits towards his human physiology major.

“The University of Newcastle is really strong in the health sciences, and the people I met were just incredible. I gained self-confidence and also realized how much I enjoy meeting a wide variety of people. In a way, this helped to confirm my interest in physical therapy—a career that demands social skills and the ability to connect with others,” he says.

“My interest in photography was strengthened, as was my desire to travel. I bought a GoPro camera and was thrilled that GoPro bought the rights to some of my photos,” he says. “Now, I take every free chance to travel and capture the beauty of the world. I credit my pursuance of these experiences to my dad.”

Broderick entered the UI Doctor of Physical Therapy program after completing a Bachelor of Science degree in human physiology. He expects to graduate in December, 2019.

“I’m very proud to be an Iowa alum. People have nothing but phenomenal things to say about Iowa grads – especially their attitudes and preparedness. The UI helps students take advantage of opportunities. It’s an environment that really encourages success,” he says.

His free time is limited these days due to his physical therapy schooling, but he still finds time to capture beautiful images of the landscapes he encounters. While his travels are extensive, as evidenced by his Instagram account, the state of Iowa remains one of his favorite subjects, as seen in his contributions to the Explore Iowa community on Instagram.

“I love that Iowa is home,” Broderick says. “No matter where I’ve been in the past or where I’ll go in the future, I’ll always have friends and family that I can count on in Iowa.”