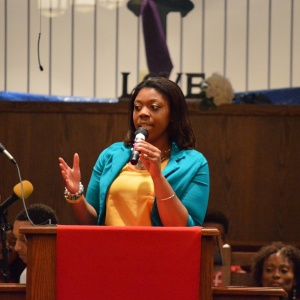 If you want to know what Ashley Allen does outside of her day job, the answer is – everything.

Allen, who graduated from the University of Iowa in 2010 and has since returned to her hometown of Davenport, spends her days as a full-time data coordinator at John Deere. But in Allen’s “spare” time, she serves as the CEO of the youth empowerment nonprofit organization she founded, works with her team to organize youth educational conferences and produce a magazine, volunteers as the marketing director for her church, helps a local gospel organization with their marketing needs, is a youth mentor, and is taking classes toward a Master’s in Public Administration.

Allen’s organization, United Now to Ignite Today’s Youth (UNITY), forges connections among people who are committed to helping drive youth success in the community of Davenport and beyond.

When Allen first graduated with degrees in journalism & mass communication and African American studies, both part of the College of Liberal Arts & Sciences, she had hopes of becoming a broadcast journalist. But in 2011, she had a different idea—to unite young people from different organizations and churches in a weekend empowerment rally. It was a huge success. It was so successful, in fact, that Allen soon realized her vision was larger than a single event. And thus, UNITY was born.

“This was not an easy thing for me to do,” Allen said. “I was a shy person; I liked to stay in my little box. And now I’m around people all the time. I would have never said I would do speeches or seminars. But when you find out your purpose, everything’s going to fall into place.”

Allen said she uses her journalism skills often, especially in the marketing and promotion of the group’s conferences and magazine layout. Her African American studies coursework encouraged her to appreciate the personal and shared history of people of all different backgrounds.

UNITY holds two annual conferences: the UNITY Educational Conference in March and the UNITY iAm Youth Empowerment Conference in September. This year’s educational conference will focus on the science, technology, engineering, and mathematics (STEM) fields, Allen said. It’s important to her that young people are aware of all the possibilities available to them.

“We’re trying to ignite the next generation of game changers and leaders and let them know they can do anything they want to do,” Allen said. “I’m just hoping that if we instill this in young people, they’ll later say, ‘I want to come back and give back to the community, like was done for me.’”