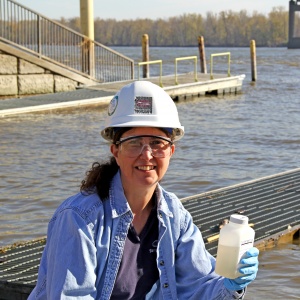 Engineering alumna Becky Svatos grew up in Iowa City in the 1960’s and became interested in environmental issues at the same time that the country awakened to the importance of protecting the environment. Her family spent considerable time outdoors camping and hiking. So her enjoyment of the outdoors added to her interest in the environment.

Because her father, George Lance, was a professor of mechanical engineering at the University of Iowa, she was exposed to engineering at an early age. He also was the faculty advisor for the Society of Women Engineers (SWE) student section, which enabled Svatos to meet very impressive women engineering students. A SWE weekend event on campus to introduce high school girls to engineering convinced her that engineering was for her, and that Iowa was the place to study civil and environmental engineering. Svatos enjoyed the small engineering program that provided her with personal support from her professors.

“I have fond memories of my days studying engineering at Iowa, including the annual MECCA events with the hunt for the MECCA stone, the MECCA ball, and the MECCA smoker downtown that included student skits and “awards” given to faculty members,” Svatos fondly recalls.

When she received her bachelor’s of science degree in civil engineering in 1982, the economy was not good and jobs were scarce, but she found a position with the US Army Corps of Engineers in Omaha.
After two years, Svatos chose to pursue a master’s degree in environmental engineering at the University of Texas.

Following graduate school, Svatos began her career in environmental consulting that continues to this day. She has lived in Florida and North Carolina, then moved back to Iowa City to raise children close to family in the community she loves. That was 17 years ago.

As the environmental and urban design market leader at Stanley Consultants, Svatos continues to pursue her passion to make the world better through environmental engineering.

“From my base in Iowa, I have traveled throughout the US and internationally to help industries, power companies, and other clients solve environmental problems, she noted. “My work includes investigating and cleaning up contaminated sites as well as helping companies improve their facilities and processes to avoid causing pollution in the first place. It is a very rewarding career that is built on the solid engineering and liberal arts foundation that I received at Iowa.”