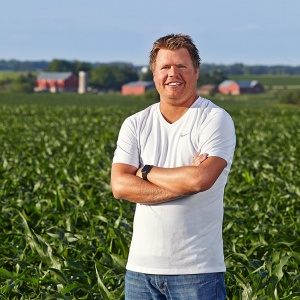 In 1999, fifteen year-old Blake Kerns noticed that the only sweet corn stand located in the Oelwein, Iowa, city limits came all the way from Minnesota. After doing some research on corn stands and sales, Kerns began toying with the idea of starting his own stand. Since he was closer to town, Kerns figured out that he could undercut the competitor stands’ costs and offer a better, more personal service to locals.

With a sprouting idea and the determination to provide fresher produce, Blake rented 2 acres of abandoned cropland and equipment and started a corn stand.

Kerns’ innovative spirit led him to study management and entrepreneurship at the University of Iowa.

By attending the UI, Blake was able to continue his produce business while receiving a first-class education in entrepreneurship.

“Since I was running a small business at the time, I was confident that studying management and entrepreneurship would benefit me immediately,” Kerns says. “The entrepreneurship program at the University of Iowa was certainly the most real world education I could have received. Being able to take what I learned about entrepreneurship and immediately apply it to my business was priceless.”

After graduating, Blake invested himself full-time in his corn stand business.

“When I was starting out I was forced to do a lot of the manual labor myself. Working 110 hours a week during the summer season was not uncommon,” he says.

Now with 2,000 acres of field corn and soybeans and over 60 acres of produce, Blake is the owner of Kerns Homegrown. He says his role in business has changed greatly.

“I no longer pick all the corn myself! I spend much of my time on logistics, labor, sales, and trying to increase automation," he says.

Kerns Homegrown products are sold in over 50 grocery stores in Iowa and at festivals, schools, and other retail locations.

Kerns employs two full-time employees and over 30 seasonal employees, many of them students who learn the value of hard work and the fundamentals of working in a business. Kerns Homegrown is able to provide Iowa with a fresher, more nutritious, better tasting product compared to produce coming from far away and is already a week old when it is put in stores.

Kerns says the hard work that came with starting his business was worth it.

“The most rewarding part has to do with the transparency of farming and entrepreneurship in general,” he says. “Planting a seed, nurturing it, picking it, delivering it- the process provides a real sense of accomplishment.”