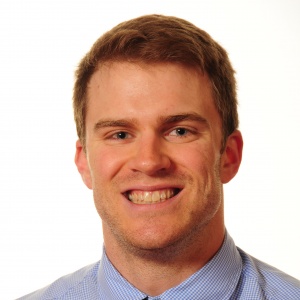 Gerleman earned a Doctor of Pharmacy (PharmD) degree from the University of Iowa College of Pharmacy in 2017. A job was waiting for him at Montross Pharmacy in Winterset in south central Iowa—his hometown of roughly 5,000 people known for its covered bridges and as actor John Wayne’s birthplace. He had worked summers there during his undergraduate years and is currently employed as the pharmacy’s clinical community pharmacist and director of clinical services.

“The number one thing in my life is family, and I consider patients to be my family,” Gerleman says, who is engaged to be married in June. He lives within five blocks of his parents in one direction, and his twin sister and her growing family in the other.

Gerleman’s professional and personal lives mix easily. His days often transition from time in the pharmacy with patients, to seeing those same people while off duty.

“As your family pharmacist, you probably see me at least monthly. And because we are in Small Town USA you’re going to see me helping with the local football program or out walking my chocolate lab with my fiancé,” he says.

This small town connection, when combined with Gerleman’s pharmacy credentials and chops—makes people comfortable discussing their health with him.

“Pharmacists are the most accessible health care provider and are rated the most respected,” he says.

Last fall at the pharmacy, an older farmer who does not often go to the doctor walked in front of Gerleman, headed for the pharmacy’s old-fashioned lunch counter.

“He looked unkempt and sweaty,” Gerleman said. He greeted the man by name and asked to take his blood pressure. “He was in a hypertensive crisis. He asked me what the results meant, and I said ‘If you were my dad I’d be driving you to the hospital right now.’”

Later, the man’s daughter called with thanks, between tears, because the man had indeed gone to an urgent care clinic, where he had a stroke.

“She said being at the hospital when he had the stroke saved his life,” Gerleman says.

“Every encounter you have as a pharmacist is an opportunity to positively impact patients,” he says. “Community pharmacies are vital to rural health care and patient access.”

Many people depend on Montross and two pharmacies related to it in nearby St. Charles and Earlham—towns with smaller populations. There are four pharmacists between the three stores, three of whom graduated from the UI. Since 97 of 99 Iowa counties have a UI Pharmacy graduate, it is easy for Montross pharmacists to collaborate well and often with other pioneering pharmacists around the state.

In addition, Gerleman and his colleagues work with college researchers who study ways to expand pharmacists’ roles into new and exciting areas.

“It’s a win-win-win situation,” Gerleman says. “The researchers get to publish articles about how new initiatives affect pharmacies, we get to learn from their results, and our patients get the very best from us right now.”