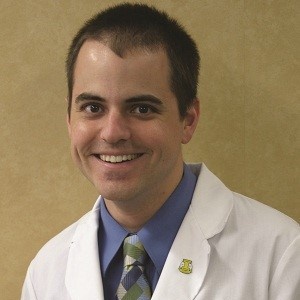 Brett Barker, ’08 PharmD, didn’t come to the University of Iowa planning to become an Iowan. But after spending six years at UI, he did just that, deciding that he wanted to raise his family in this great state.

Barker was drawn to the University of Iowa because of its nationally-renowned pharmacy program. The College of Pharmacy has been at the forefront of innovative pharmacy practice since its founding in 1885. Once on campus, Brett’s experience with student leadership involvement outside of the classroom was crucial to prepare him for leadership roles in his career, community, and professional organizations. As a student, he was involved in many organizations across campus, including Dance Marathon Executive Council, Hawkeye Marching Band Undergraduate Staff, UI Student Government, and College of Pharmacy Student Council serving as the Vice President.

After receiving his Doctor of Pharmacy, Barker accepted a pharmacy manager position for NuCara Pharmacy in Nevada, Iowa. After two years in this position, he was offered the position of Director of Clinical Services and coordinated NuCara clinical programs across the company. Barker’s career has continued to grow with NuCara, and he now serves as Vice President of Operations, where he oversees daily operations of all NuCara locations.

In addition to the professional opportunities offered by his employer, Barker chose to stay in Iowa because of its national pharmacy reputation. Iowa is known to have a high quality of pharmacy practice due to close cooperation between the Iowa Pharmacy Association and the two colleges of pharmacy (Iowa and Drake).

Barker’s days of involvement didn’t end with graduation, as he’s active in several Nevada organizations. He recently completed a term on the Nevada City Council and has been involved with economic development, the Nevada Chamber of Commerce, and the Nevada Historical Society, among others. He partners with Youth and Shelter Services and the Nevada Department of Public Safety for drug take back events to help decrease drug abuse and diversion in the community. In 2013 Brett received the YSS Volunteer Leadership and Service Award for these efforts.

“In my community, I’m known for being a major advocate and supporter of the University of Iowa. I can’t say enough about the impact that the University of Iowa has had on me. My time as a student at Iowa was a very pivotal time in my life and a vital piece of both the person and the professional that I am today."