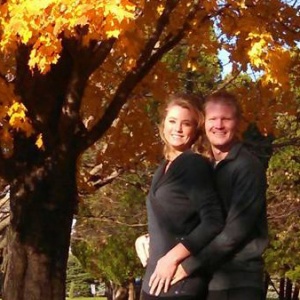 When Chris Olesen works with his students in the Ruthven-Ayrshire Community School District in northwest Iowa, he understands well the lives they lead—and the possibilities that lie before them.

Chris, who graduated from the University of Iowa in 2010 with a bachelor’s degree in History, grew up just up the road in Graettinger, Iowa, in Palo Alto County. He was a lifelong Hawkeye fan, and when it came time for college, there was no question where he’d go. He was Iowa City-bound.

When his college experiences were over—including earning a second B.A. degree in education from the University of Northern Iowa and a student-teaching stint in New Hampshire—there was also no question where he’d go: Chris is back in the community that shaped his childhood and his values, building a life and developing a career.

“It’s like a big family here,” he says. “You can rely on anyone, and they can rely on you.”

He’s one of just five secondary teachers in his tiny school district, helping the kids who are following in his footsteps learn about their world. He is involved in their lives every step of the way from middle school on, teaching Social Studies, Geography, Civics, U.S. and World History, and Government to students in the 5th to 12th grades. Each year he helps his senior Government students discover what it means to be a citizen and a leader, by guiding them through the development and implementation of a public policy initiative, effecting real change in their community and school.

“It’s fun to watch their growth over time,” Chris says. “I can really forge relationships with the kids, and be a mentor.” He even gets to work with his little sisters, who are walking the same halls he once did.

Chris came to the UI to study engineering, but switched to an open major after his freshman year. After a talk with a former teacher when he went back home for a visit, he declared his major in History. “It’s the story of who we are and how we got here,” he says. “I loved it.”

He made sure to make the most of his opportunities at Iowa. In addition to a job in Dr. John Engelhardt’s genetics lab in the Carver College of Medicine, Chris was deeply involved in the Newman Catholic Student Center and in the Knights of Columbus. As a Grand Knight, he helped expand Knights of Columbus College Councils across the state.

“If I wasn’t in class, I was in the Engelhardt Lab, the Newman Center, Carver-Hawkeye Arena, or Kinnick Stadium,” he remembers.

Now Chris and his wife, Cassie, are expecting their first baby in 2016. Their child will be another Iowan—and maybe another UI student—to keep the Hawkeye State traditions alive.