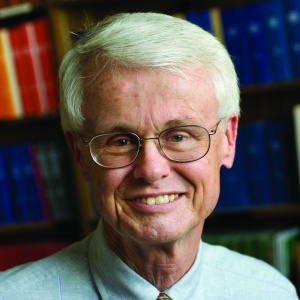 Chuck Connerly knows he doesn’t have all the solutions to the world’s planning problems. The professor and director of the University of Iowa’s School of Urban and Regional Planning recognizes that we all must work well together to make our communities better places to live.

This humble approach helped Connerly earn the 2018 winner of the Jay Chatterjee Distinguished Service Award. He accepted this prestigious award in October at the Association of Collegiate Schools of Planning (ACSP) Annual Conference in Buffalo, New York.

The award was established in 1998 to recognize individual faculty whose exceptional service, actions, and leadership have had a lasting and positive impact on the ACSP and its member schools.

“The communicative approach I use is humble in the sense that I don’t know what the right answer is,” says Connerly, a member of the ACSP for the last 38 years. “I want to find out what ideas other people have through conversation and relationship building. It’s about communicating with a variety of people, listening a lot, and developing ideas based on experiences other people have had.”

“I admire Chuck’s humility,” says Stacey Swearingen White, professor and director of the Urban Planning Program at the University of Kansas. “Some leaders seem to seek continuous accolades for their accomplishments—reminders of their greatness, perhaps. In contrast, Chuck is quick to share credit, rather than claim it for himself.”

As president of the ACSP from 2011-13, Connerly sought to increase the number of female and minority planning faculty members. He also led ACSP’s efforts to challenge proposed changes in the Planning Accreditation Board’s accreditation standards and criteria, which were viewed as retreating from earlier advances in diversity.

“Chuck Connerly has been challenging ACSP to be better,” says Bruce Stiftel, professor and chair of the School of City and Regional Planning at Georgia Tech University. “He has repeatedly taken on needed and sometimes controversial challenges, bringing us closer to the ideals we hold as planners and educators, all the while building the community to be ready for the challenges ahead.”

Connerly has been a professor at the UI since 2008. One year later, he founded the Iowa Initiative for Sustainable Communities. Under Connerly’s leadership, students in the School of Urban and Regional Planning’s Field Problems courses complete community improvement projects in Iowa.

During the 2017-18 academic year, second-year students worked with the East Central Intergovernmental Association (ECIA) and the City of Clinton to develop an economic development plan for the city. They also partnered with the ECIA and the Jackson County Economic Alliance to create a plan for attracting young families to live in Jackson County.

Through these outreach efforts, Connerly strives to educate people about the job of urban planners.

“Urban planning is in everybody’s day to day life, whether you’re talking about land use, transportation, or affordable housing downtown,” Connerly says. “But citizens don’t think that people are paid to do it. They just know that it happens.”

“The key to planning is doing some good,” Connerly says. “You’re making the world a better place to live. That’s what drives many of our students.”