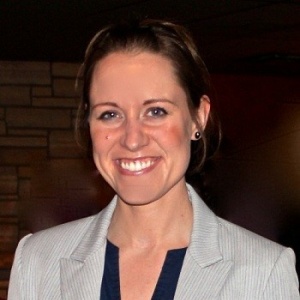 Growing up in Des Moines, Iowa, Claire Heger Scholl always had a fire in her belly for helping people with vulnerabilities, from the elderly and sick to those struggling with homelessness and other socioeconomic hardships. So after Claire graduated from Roosevelt High School, she headed for the University of Iowa where she was able to explore her interests through the general education program. That led her to courses in the School of Social Work in the College of Liberal Arts & Sciences, from which she graduated in 2003 with a bachelor’s degree.

For Claire, now the executive director of the Iowa Chapter of the Cystic Fibrosis Foundation, pursuing her UI social work degree was a decision that has fundamentally shaped her life’s direction.

“It was more than just an undergrad experience for me,” she says. “It laid the foundation for the rest of my life—who I am, every decision I make, and everything I do.” While in the School of Social Work, Claire was offered service opportunities that pushed her beyond her life as a college student. In particular, she completed an internship at Iowa City’s homeless shelter, now called Shelter House. “It allowed me to see real-world issues, and I came to understand that everyone, even a college student, can have an impact.”

After Claire left the UI and returned to Des Moines, she landed a job as operations manager for Hawthorn Hill, a shelter for homeless women and children. The UI had prepared her perfectly for the position. “Everything I did - nonprofit programming, crisis management, working with mental health issues—I learned at the UI.”

After three years, she moved on to the Cystic Fibrosis Foundation as executive director, where she focuses on fundraising and development for cystic fibrosis research. All of that good work—and her two children and husband—keep Claire busy and fulfilled making life better for countless Iowans. And it all started in the University of Iowa College of Liberal Arts & Sciences.