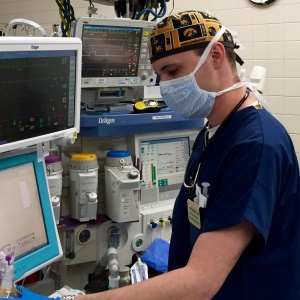 “Try to figure out what you can do while you’re an undergraduate student to give yourself the best chance of success after you graduate,” he says. “Accomplishing a few objectives, big or small, while you’re a student can pay off largely later on in life.”

He should know. Just seven years after earning his Bachelor of Science in Nursing (BSN) from the University of Iowa, the U.S. Navy Nurse Corps officer is set to become the sole anesthesia provider on the USS George H.W. Bush (CVN 77) Nimitz Class Aircraft Carrier, where he will be responsible for the anesthesia and emergency care of more than 5,000 sailors aboard the ship.

Lt. Gremore always wanted to attend the University of Iowa, and by his sophomore year, he knew what degree he wanted to pursue.

“After talking to a recruiter at UI’s ROTC detachment, I learned about scholarship opportunities for BSN students as well as different types of advanced practice nursing careers,” he explained. “This is when I decided that I wanted to pursue nurse anesthesia. Knowing what I wanted to do with my nursing degree gave me the opportunity to choose a path at the University of Iowa that would suit me the best once I graduated.”

Lt. Gremore notes that getting his BSN was a significant stepping stone to becoming a Certified Registered Nurse Anesthetist (CRNA), and credits UI’s College of Nursing for providing him with a solid foundation that’s helped his career to flourish.

“Completing the BSN program is the reason I’m where I am today. During my final semesters, I completed all of the prerequisites required to apply to UI’s CRNA program. I was also able to work as a phlebotomist to become more skilled at venipuncture, which is a relatively small, but important skill to have as an anesthesia provider.”

When Lt. Gremore graduated from the College of Nursing in 2008, he joined the Navy and served as a critical care nurse at the National Naval Medical Center (now known as the Walter Reed National Military Medical Center) in Bethesda, Md., caring for many wounded warriors, senators, political figures, and military family members. The lieutenant currently practices as a CRNA at Naval Medical Center Portsmouth (NMCP) in Portsmouth, Va., doing a wide variety of anesthesia cases in the operating room as well as many neuraxial (epidural/spinal) anesthetics for obstetric patients. This spring, summer and fall, he will be the lone anesthesia provider aboard the USS George H.W. Bush while the ship completes its sea trials in preparation for deployment.

“I still frequently reminisce about where my career started and remain proud to tell my comrades where I obtained my undergraduate degree … it still feels like it was just yesterday,” said Lt. Gremore. “Not a day goes by that I don’t think about where it all started and I’m always proud to say that I am a Hawkeye!”