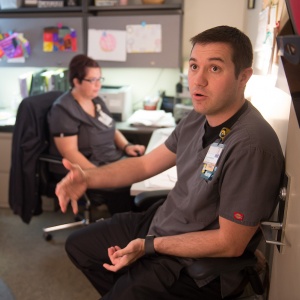 On one of the busiest patient floors at University of Iowa Hospitals & Clinics, Nurse Manager Dan Lose oversees a staff of 140, an annual budget of $10 million, and a daily churn of patients that puts his medical and management skills to the test.

In many ways, Lose, a 2016 Doctor of Nursing Practice (DNP) graduate of the UI College of Nursing, is the embodiment of a new generation of nurses: health care professionals who are extremely skilled at patient care, but also key health care leaders and innovators who play a pivotal role in advancing health care, research, and technology.

“Health care is changing and nurses are at the forefront of that change,” Lose, a resident of North Liberty, Iowa, who also completed his bachelor of science in nursing (BSN) at the UI College of Nursing in 2012, says. “Nurse leaders bring the perspective of patients and front-line staff to the decision-making table, and I believe that our input is imperative.”

As the health care landscape continues to shift, nursing education must also evolve. The Institute of Medicine’s landmark report, The Future of Nursing: Leading Change, Advancing Health, has been one of the driving forces behind the evolution of nursing education at the UI. Released in 2010, the report advocated for strengthening the nursing profession through advanced education, and increasing the number of nursing professionals in the U.S. to meet new patient demands.

When the report was released, former College of Nursing Dean Rita Frantz took a leadership role in implementing recommendations statewide, creating an action team to oversee the process and seeking the help of college experts. Lose says he was lucky to work with Frantz on the implementation process.

“That report is probably one of the big reasons I am where I am today,” Lose says. “It made everyone realize the big changes ahead in health care and it pushed nurses to be at the forefront of that change. People still talk about the report eight years later. It continues to have a profound impact on nursing education and the profession as a whole.”

When it comes to historical ties and a proclivity for the College of Nursing, Lose isn’t the only one in his family with a strong connection to Iowa.

“The college and University of Iowa have been wonderful to us and have played a substantial role in our careers as clinicians, leaders, and teachers,” he says. “I’m glad I went to UI for my nursing degrees because I learned from world-renowned faculty who provided me with valuable opportunities to learn and grow as a nurse.”