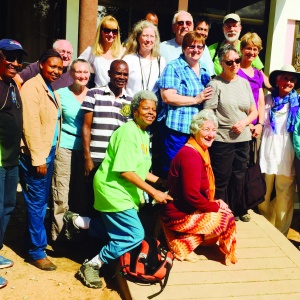 Of all the accolades given to Deborah Ann Turner (’78 MD, ’82 R), the honor she cherishes most arrived in the mail with little fanfare. It was a certificate from the Schwartz Center for Compassionate Care.

Through the center’s Honor Your Caregiver program, grateful patients make a donation in a caregiver’s name to the nonprofit Schwartz Center, known for supporting, educating, and training caregivers in delivering compassionate care.

“One of the families I worked with did this, and that was one of the most humbling and most meaningful awards I ever got. It hopefully means that I touched some people’s lives,” Turner says.

Turner retired in July 2015 after more than 30 years as a gynecologic oncologist, most recently with Mercy Medical Center in Des Moines, where she developed the gynecologic oncology program and served as its director. In 2013 she was inducted into the Iowa Women’s Hall of Fame. The Mason City native was the first African-American woman to be certified by the American Board of Obstetrics and Gynecology in gynecologic oncology and to be hired as a gynecologic oncologist at the University of Iowa, University of Nebraska, and Medical College of Wisconsin. She has served on the Board of Regents, State of Iowa, and as co-president of the League of Women Voters of Iowa and president of the Metro League of Women Voters in Des Moines.

Now she is focusing on her role as vice president of international programs with The Outreach Program based in Des Moines and Union, Iowa, which facilitates medical, educational, and nutritional support, as well as clean water, for residents of Tanzania. Turner specializes in organizing medical mission trips to Tanzania twice a year and working with the Kids’ Feeding Centers. This spring she’s making her 10th visit since 2011.

“I went into gyn onc because I loved the patients I was taking care of. As I’ve been over in Tanzania, I’ve fallen in love with the patient population again, and I realize people are people all around the world. The women patients there remind me of my patients here, and it’s a continuation of that feeling I had when I was in active practice,” she says.

“What I learned from them, not only clinically but how you relate to people and how you take care of patients, has carried me through and helped make me the doctor I am today,” Turner says.