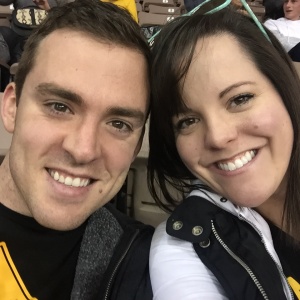 It isn’t unusual for University of Iowa students to meet at school and fall in love—one such couple is Dr. Dan Pelzer (12MD 15R-Pediatrics) and Dr. Diana (Rich) Pelzer (10BA 14DDS 16R-Pediatric Dentistry).

A farm kid from Tipton, IA, Dan has many ties to medicine at the University of Iowa. While completing his undergraduate education at the University of Northern Iowa, he spent a summer finishing EMT training at UI Hospitals and Clinics. Prior to medical school, he conducted a research project at the Center for Disabilities and Development that focused on kids with special healthcare needs.

At the UI Carver College of Medicine, Dan was active in the Pediatrics Interest Group (PIG, of course) and inducted into the prestigious Gold Humanism Honors Society. Later, as a pediatrics resident at UI Stead Family Children’s Hospital, his passion for teaching medical students was recognized with the Humanism and Excellence in Teaching Award. He is now a pediatrician at The Iowa Clinic in West Des Moines.

A fun YouTube video delves into why Dan chose to become a pediatrician, as well as a few other, more personal insights ranging from his love for his dog, Moose, to the current contents of his refrigerator. In it he says, “I decided to become a doctor because I always enjoyed math and science, I like helping people, and I had a great pediatrician when I was growing up. The most rewarding part of my job is when kids bring me pictures that they’ve drawn and little craft projects they’ve put together—that just totally makes my day.”

Diana—a city girl from Bettendorf, IA— majored in health sciences and volunteered at UI Hospitals and Clinics as an undergrad. She and Dan met at UI Hospitals and Clinics during a volunteer panel for science-minded junior high students in the summer of 2009. Following admission to dental school, she continued to be involved in the community by providing dental care at Iowa Mission of Mercy and the Iowa City Free Medical Clinic. Somewhere along the way, Dan convinced her that pediatric dentistry was the way to go and she hasn’t looked back.

Diana was awarded the American Academy of Pediatric Dentistry Pre-doctoral Award for her achievements during dental school. She then completed two additional years of training as a resident at the UI College of Dentistry and Dental Clinics focusing on the growth, development, and oral care of pediatric and special needs patients. She is now a pediatric dentist at the Des Moines Pediatric Dental Center and serves as an adjunct professor at the University of Iowa’s Department of Pediatric Dentistry.

“I love being a dentist because it combines some of my most favorite things: working with my hands and being artistic, thinking scientifically, and most importantly, talking with people all day to make lasting connections with my patients and their families. Going to the dentist can be stressful and working with children and their parents to achieve happy and fun dental visits is my goal.”

After four years of dating, Dan and Diana were married in 2013. As newlyweds, they joined forces to begin a project called “First Tooth, First Brush” which taught pediatric medical residents about infant oral hygiene. Residents then gave pediatric patients at UI Health Care—Iowa River Landing their first toothbrush during routine well-child visits. To date, over 1,000 children have received toothbrushes on their way to healthier and happier smiles.

As a health care team, Dan and Diana will undoubtedly continue to make a significant impact in the lives of countless pediatric patients for years to come.