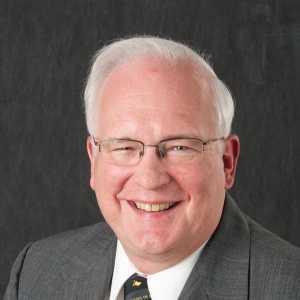 The pharmacy world slowly rotated 180 degrees during Ed Maier’s career. He credits his University of Iowa education with preparing him for the shift.

Maier, ’70 BSPh, grew up in the small town of Mapleton, Iowa. In eighth grade, he began working for Charles Griffin, Jr., third-generation owner of Griffin Pharmacy. Later, he followed in Griffin’s footsteps and attended the University of Iowa. Maier returned to Griffin Pharmacy as a staff pharmacist in 1970.

In pharmacy school, Maier was taught the then-progressive notion that pharmacists should help patients understand and buy into their prescribed therapies.

“When I first began practicing pharmacy, we didn’t put the name of the drug on the prescription,” said Maier. “The doctor made the decision how to treat patients, and they were not supposed to question that very much. As a pharmacist, you knew what the drug was, so you had a pretty good guess what it was for, but you just didn’t visit about it.”

Maier’s experiences at the UI made him see his hometown of Mapleton differently.

“In small towns, there are a lot of things that need to be done and just a few people to get them done,” said Maier. “My education at the UI kind of rounded me out and prepared me to be involved in my community. That’s what makes life worthwhile.”

In 1981, Maier bought Griffin Pharmacy and in 1992 moved it within Mapleton’s city limits and renamed it Maier Family Pharmacy. At that time, it was the only pharmacy in town and drew people in from up to 30 miles away.

One April night in 2011, an EF-3 tornado ripped through Mapleton, damaging the majority of the town. Thankfully, Maier’s pharmacy sustained only minor damage, but the word spread fast that the town was without power and needed help. Pharmacists across Iowa called Maier’s cell phone with offers of assistance.

“The next morning, we got a generator hooked up at the pharmacy and started taking care of people who had lost their houses, their prescriptions, everything that they had,” said Maier. “Working in a small Iowa town, these people are not just your customers and your patients. They’re your neighbors, your friends, people you’ve known forever.”