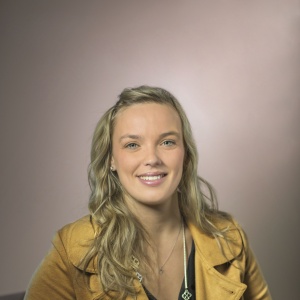 Emily Schmitt pursued a legal education because she wanted a career that would help her give back to her community.

And, after graduating from the University of Iowa College of Law in 2011, Schmitt began working for Sukup Manufacturing Co. in Sheffield, Iowa as corporate counsel.

Owned by her family, Sukup is one of the fastest growing grain bin manufacturers in the world. It’s also the largest family-owned, full-line grain drying and storage equipment manufacturer in the country.

As the only lawyer at Sukup — which employs more than 500 people — Schmitt says she plays a vital role providing legal counsel at all levels of the company.

“Every day is different, and that helps me fine tune what I know about many different legal issues,” says Schmitt. “If I’m answering an FMLA question at 10, then by 11 I’m getting asked questions about product liability and what we do in the case of a wind storm and that keeps me on my toes.”

Schmitt says she enjoys the pace of the work and using her creativity to solve problems.

“I deal mostly with preventive action and I like being able to use my legal education to protect our company,” Schmitt says “Business speed is often different than litigation speed and I enjoy being responsive and being known for handling things right away. I think that’s something our employees rely on.”

In addition to her work at Sukup, Schmitt serves on the Board of Directors for the North Iowa Area Community College Foundation, and is a member of the Iowa Innovation Council. She also recently completed a five-year term on the Opportunity Village Board of Directors, which helps people with intellectual disabilities in the north central part of the state.

Schmitt says the legal basis she set while earning her J.D. at the UI College of Law has been invaluable as she deals with complex issues through her work in the community, and in her family’s company.

“The most important part of earning my J.D. was how it changed the way I process and think about everything,” Schmitt says. “I think a legal education at Iowa Law really helps you think critically about both sides of an argument so you can advocate for your position even better.”

Ultimately, Schmitt says the education she earned at the College of Law helped her build a life in the state she loves, for a company that’s very close to her heart.