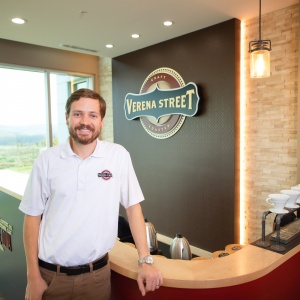 Eric Gantz had an idyllic Iowa childhood. He grew up in Dubuque, Iowa, surrounded by his large extended family on the same street as his cousin Michael: Verena Street. Today you can go to any Hy-Vee and see a childhood snapshot of Michael and Eric riding their pint-sized bicycles on the side of a bag of Verena Street Coffee.

“When Michael and I launched Verena Street, we were trying to capture that feeling, that experience of growing up in a small Iowa town,” Gantz says.

Starting at age 12, the pair became the fourth generation to work in the family’s Pepsi franchise business. During his formative years, Gantz attended the school of hard work and hustle, and that experience led him to choose accounting when he entered the University of Iowa.

“I chose to pursue a degree in accounting because it’s the backbone of any business,” he says. “I approached it from the perspective of ‘What is my career path and what do I need to do to get there?’ Accounting teaches you to see things in the numbers before business challenges become evident.”

He put his head down and worked hard through college, including summers driving a delivery truck for the family business. He has fond memories of campus life and the electricity of Iowa City during football season. He claims the only thing close to the dynamic atmosphere of Kinnick Stadium and the enthusiasm of Hawkeye fans was a Green Bay Packers game that he attended with his wife after college.

After graduating from Iowa in 2004, he returned to Dubuque and, in 2010, he and his cousin Michael launched Verena Street Coffee Co. to diversify the family business and to celebrate Dubuque pride. The coffee company’s foundational blends, including Mississippi Grogg, Nine Mile Sunset, and Lock & Dam 11, are inspired by Dubuque landmarks.

“When I was growing up, young people wanted to get out of Dubuque. We wanted to build this company in a way that encouraged people to be proud of this place and its heritage,” he says. “We started seeing big-city brands creeping into Iowa. We want an Iowa brand to start creeping into the big cities.”