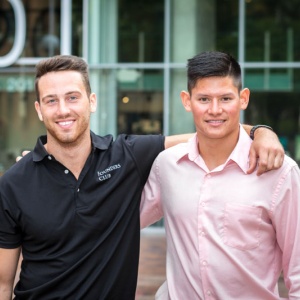 Pahl and Shaull launched Health Tech Solutions out of the Bedell Entrepreneurship Learning Laboratory (BELL) at the University of Iowa in 2015. The resources they had at the BELL led them to create Health Tech Solutions’ first software product, ORGANizer, which facilitates communication between healthcare staff to improve organ donation success rates. The BELL is a student incubator run by the University of Iowa John Pappajohn Entrepreneurial Center (Iowa JPEC) that gives participants access to free office space and entrepreneurial mentorship.

The young founders have also taken advantage of other opportunities that Iowa JPEC offers to student entrepreneurs. The team competed and won cash prizes for their business at numerous Iowa JPEC events, including the Business Model Competition and the Pappajohn Student Entrepreneurial Venture Competition. Most recently, they were awarded $2,500 at Iowa JPEC’s fall 2016 Rose Francis Elevator Pitch Competition.

They are also recipients of the 2015-2016 Hubert E. Storer Engineering Student Entrepreneurial Startup Award offered by the University of Iowa College of Engineering, and have received support from the Iowa Economic Development Authority and other sources. Pahl and Shaull’s ability to win business prizes from multiple UI colleges shows their adaptability and professionalism when it comes to entrepreneurship.

The duo currently still operates out of the BELL as they move forward in rolling out their mobile software system. On December 1, 2016, Iowa Donor Network began piloting ORGANizer alongside their current organ procurement communication system in order to boost the number of successful organ transplants that occur through their organization. Beginning February 1, 2017, ORGANizer will facilitate all organ transplants in the state of Iowa. This is a huge accomplishment for the young business, achieved by its founders through hard work and perseverance.

Health Tech Solutions was recently awarded a $100,000 loan from the Iowa Economic Development Authority Board and also plans to open a $2 million Series A round of venture capital funding in late 2017. To date, the entrepreneurs have secured over $665,500 in private investments. Pahl and Shaull have successfully moved the business through the concept and startup phases and are now looking toward commercialization and distribution. This shift in focus created a demand for new talent within the company, so they expanded their development team, which now includes three full-time developers. Pahl and Shaull will be Hometown Hawkeyes to watch over the next year as they continue to prove that entrepreneurship is thriving in Iowa.