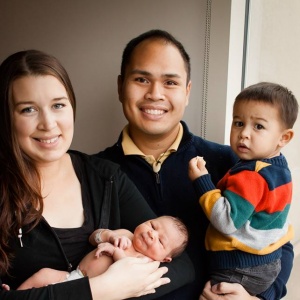 Standing in the middle of T. Anne Cleary walkway on the University of Iowa campus in 2005, Farfum Ladroma, of Manning, Iowa, saw his future: “This is where I need to be,” he thought. And, as with most things with Ladroma, thought turned into action.

Although he enjoyed his other college visits, it was the students transitioning between classes that day, along with the “big-city, small-town” atmosphere Iowa City is known for, that solidified his academic decision.

“I loved living on campus,” says Ladroma. “I was an R.A. (Resident Assistant) in Mayflower, and was involved in many student life activities. I loved the diversity of the student population.”

Ladroma studied French, Spanish, and International Studies: Development at the UI. A presentation about a study abroad program piqued his interest in the possibility of studying in France.

“I knew I would become much more fluent in French if I was forced to speak it each day,” Farfum explained.

A Regents Study Abroad scholarship paved the way for Ladroma’s opportunity to immerse himself in the European culture.

“It was a great opportunity to continue my education abroad without being financially broke. I was able to visit the United Nations General Assembly, where the world comes together. Amazing.”

One benefit of studying abroad that Ladroma didn’t anticipate was meeting his future wife, Ashley (DeCarlo) Ladroma, (B.A, communication studies, French), at a presentation in Lyon, France. The couple grew up just 38 miles from each other (Ashley is from Harlan, Iowa), but first met in France.

“After I graduated, I joined the Peace Corps and lived in Tonga for two years before returning to get married,” says Farfum, who completed a B.A. in international studies in 2005. “While in Tonga, I taught English and established a pilot program for reef restoration and coral rehabilitation.”

Upon getting married in March 2012, the Ladromas settled into life in Des Moines. Farfum has worked for the Des Moines Area Community College Urban Campus since December 2011 and is currently the coordinator of the Testing/Academic Achievement Center. He is also pursuing an MBA degree with the UI at its Des Moines campus. They have two sons—a 2-year-old and a 5-month-old.

“My wife and I wanted to live and raise our children in Iowa,” Ladroma says.

He credits some of his experience living outside of Iowa as one of the reasons he lives here now.

“Like most young people, I didn’t realize how much I loved Iowa until I left Iowa,” says Ladroma. “I missed the Iowa culture, the ‘sea of corn’, and the ease of going to a restaurant, getting sushi, or going to a play in the community.”

The civic-minded Ladromas enjoy non-profit community activities from teaching English to refugees to sponsoring meals at a local family emergency shelter. “We love the community engagement in Des Moines,” Farfum explains. “We wanted to live in the community where we work, and do what we can to help make Iowa a better place.”