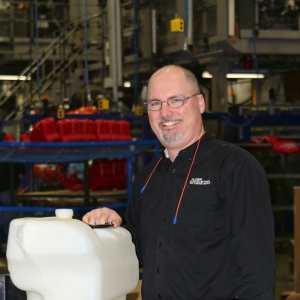 A life-long Hawkeye fan, Geoff Ward wanted to attend the University of Iowa as far back as elementary school. When he started to consider engineering, he was encouraged to look at other schools. By visiting Iowa, Ward was able to meet personally with the dean of the College of Engineering.

“Learning about the philosophy to keep the college to a smaller size and focusing admissions on students who had a high chance of succeeding, I decided that Iowa was the school for me,” Ward confirmed. “It was a great combination of a small college in a big university, so it was exactly what I was looking for.”

One advantage of the size of the College of Engineering was that it made it possible to get to know the professors.

“Taking a class from Professor Ralph Stephens, I found that I was very interested in metal fatigue, and I started talking with him about the possibility of going to graduate school to perform research in this area,” Ward said. “He offered me the opportunity to work in his lab as an undergraduate research assistant, and he became an outstanding mentor to me.

“While I had a lot of reasons to want to continue my graduate education at Iowa, I felt it was best for me to look into several schools and expose myself to other perspectives,” he explained. “Professor Stephens was gracious enough to write a very flattering letter of recommendation to a colleague at another university. Not only did this help me get accepted into the school’s graduate program, but it also helped me to receive a NASA Fellowship to fund my research and tuition.”

“I’ll forever be grateful to Professor Stephens for all I learned from him as well as the opportunities he created for me in a relatively short time working with him,” Ward added.
After completing his Ph.D., Ward went to work at Rolls-Royce Corporation (formerly Allison Engine Company) in Indianapolis on metal fatigue. He enjoyed the work, but his wife, Beth, and he had always wanted to get back to Iowa. Through some of Beth’s family that lived in Fairfield, IA, Ward learned of a small plastics company that was looking for an engineer. He met with the owner of the company, Dick Smith, only to discover Smith was also a mechanical engineering graduate from the University of Iowa.

Living and working in a small town for a mid-sized company has provided Ward with many opportunities above and beyond the day-to-day job responsibilities. Beth and he are able to raise their children there, exposing them to the Iowa values with which they were both raised.

“The family environment at Agri-Industrial Plastics has fostered many relationships not only with coworkers, but their families, as well,” Ward said. “I’ve been able to connect and get involved with several areas in the community of Fairfield, as well as to give back to my vocation and industry through different organizations.”