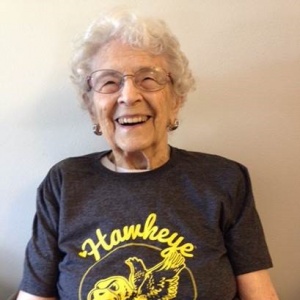 As one of the College of Education’s oldest alumni, Gracka Gerardi, who received her bachelor’s degree in Music Education in 1936, has seen quite a bit of change over the years, but consistent has been her profound love of music and joy of sharing it with others through her work as an educator.

Gerardi says things were a little different when she was a student at the University of Iowa in the 1930s. Students didn’t own cars, so she would take two trains to get back to her hometown of Klemme, Iowa, near Clear Lake. She also says there weren’t laundromats.

“We had to buy this special suitcase,” Gerardi says. “I packed and mailed my dirty clothes back to my mother in Klemme, and she would take care of them and mail the clean clothes back to me.”

While at the University of Iowa, Gerardi studied piano under teachers she admired — she notes Philip Greeley Clapp, Harry Thatcher, and others — who challenged her abilities and greatly influenced her musical aesthetic.

“The teachers taught a different way of touching the keys. People say ‘We don’t have to see you playing the piano, we know just by the sound,’” Gerardi says. “That’s something that I can thank the University of Iowa for.”

After graduation, Gerardi went on to teach music at an elementary school. She also gave private piano lessons, and eventually accordion lessons, which led her to meet her husband.

With her husband, who also loved music, the two of them taught roughly 135 students each week in their greater northern Iowa community. Gerardi continued teaching until she was 97, and to this day, she still practices piano in her home in Garner. With more than a century of living, she says music has helped her through many moments in her life.

“Music is important because it can help us through physical problems,” Gerardi says. “In fact, it has helped me so much in my personal life — I couldn’t have done it without music.”