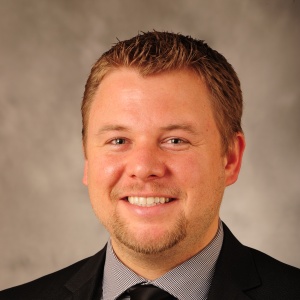 Grant Houselog, ’16 PharmD, is a pharmacist and specialist at the Iowa Poison Control Center in Sioux City. His job allows him to work with both citizens and healthcare providers of Iowa every day. He tackles a variety of challenges on the job: from answering questions about bites and stings to advising parents calling with small children who ingested a potential poison to helping hospital providers with a patient who was found unresponsive. There’s no rhyme or reason to what the next phone call may be, but being equipped with the information to handle them efficiently and accurately is paramount.

While definitely an exciting career choice, it’s not the path Houselog thought he would take. Throughout pharmacy school, he assumed he would work in a hospital or hospital administration. As he set out on his fourth-year experiential rotations, Houselog had a personal goal to get the most out of each of rotation. One of his sites was at the Iowa Poison Control Center, and it was there that he became very intrigued by the work that is done in the world of toxicology.

Growing up in Dubuque, Houselog had plans of attending the University of Iowa for medical school and eventually becoming a cardiologist. In order to achieve that career path, he decided to get a job in a pharmacy to gain familiarity with the drugs that he hoped to one day prescribe. After a short time working in a pharmacy, he realized that being a pharmacist was his true calling.

“Being the most accessible health care provider to so many patients was incredibly rewarding,” Houselog stated. “Every single day I had the opportunity to interact with patients and providers alike. Offering information, recommendations, and sometimes just an available ear to listen made each day an adventure.”

Houselog and his wife, Elise, ’15 PharmD, are both active members of the Iowa Pharmacy Association and the American Pharmacists Association. Both serve on the advisory council for the Western Iowa Tech Community College Pharmacy Technician program as well. “I feel it’s important to have a voice in the organizations that are driving our profession forward. Being involved and invested in the profession makes pharmacy even more rewarding,” he says.