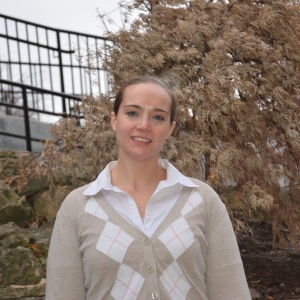 Halley Woodward, who earned her doctoral degree in psychology from the University of Iowa in 2016, is putting her research skills and clinical training to great use as a clinical psychologist and the evidence-based psychotherapy coordinator at the VA Central Iowa Health Care System in Des Moines. She treats veterans with Post Traumatic Stress Disorder (PTSD) and other trauma-related conditions, such as depression and substance abuse, in an outpatient setting.

Woodward utilizes evidence-based treatments for veterans that involve confronting unpleasant, traumatic memories and avoided situations. Avoidance is a hallmark for people with PTSD, and that approach can work well in the short term, but tends to keep PTSD around in the long term.

During their sessions, Woodward asks veterans to engage with memories and associated emotions about the worst experiences of their lives. Many of the veterans under her care are men who have received socialization and military training that encourage them not to feel a range of emotions, often only anger.

“To help a group of people who have done so much for our country overcome some of the barriers associated with their service is especially fulfilling for me,” Woodward says. “To work with folks on reconnecting with those emotional experiences and moving on from the most difficult things that have happened to them is extraordinarily rewarding.”

Woodward came to the university on a Presidential Fellowship from the UI Graduate College. Being on the fellowship allowed her to invest in her research and tailor her academic training to a greater degree. She received research and clinical training in the Clinical Psychology Program, which emphasizes investigation and scientific integrity and the production of new knowledge. Her mentor was psychological and brain sciences professor Teresa Treat.

“All the research training I’ve received has allowed me to better understand the components of the therapies that we offer at the Central Iowa VA,” she says. “The research training gives me ideas about how I can help people implement and disseminate those treatments that are likely to work best for our veterans.”

Woodward, who completed her clinical internship training at the Central Iowa VA, estimates that about two-thirds of her patients experience significant improvement with their PTSD due to these highly-structured, goal-oriented, prolonged exposure treatments.

“I find it really rewarding to work with veterans and to do trauma work,” Woodward says. “If I get somebody who is motivated and willing to put in the time and effort, I see these folks make huge changes in relatively short periods of time. It’s kind of a personal challenge for me with this particular population."