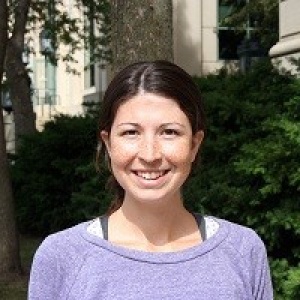 Heather Robinson does not limit her research training to the laboratory. She knows there is much to learn beyond the walls of the University of Iowa.

While studying at the UI, Robinson volunteered at Big Brothers Big Sisters of Johnson County where she mentored an 11-year-old girl. Through this experience, Robinson learned why she loves working with children. “They’re excited and they’re curious. They’re a lot like me,” Robinson says. “I can be imaginative at times. I get that giddy excitement.”

Robinson carries this enthusiasm and curiosity into her scientific work. With a keen interest in studying empathy and the brain, she began graduate school at the UI, eventually finding her current research focus on the social deficits of autistic children.

Autism is a neurodevelopmental disorder characterized by impaired social interaction and communication, as well as repetitive behaviors and restricted interests.

“What I find interesting is that many people with autism have IQs in the normal range,” Robinson says. “Despite having normal cognitive abilities, they do poorly socially. I want to know what’s different about their social abilities.”

Robinson works with her mentor, UI Neurology and Psychology Professor Dan Tranel, on the neuropsychology and neuroimaging aspects of the project. She also collaborates with clinical psychiatry professor Todd Kopelman and clinical psychologist Kelly Pelzel to recruit study subjects from various University of Iowa clinics.

“Where you come from,” Robinson says, “really does shape how you see things.”

“Growing up in Hamburg, Iowa taught me a lot about how to work hard. I worked throughout high school and college,” Robinson says. “My mom worked two jobs. I worked with her at a restaurant. I was taught how to work hard and how to generally be nice and helpful to people.”

“In Heather Robinson, I see a little bit of myself,” says Tranel. “I see someone from a modest background who is resourceful, and someone who has the right amount of confidence and risk taking” to tackle complex research.

“At the University of Iowa, I’ve become more me. I’ve been provided the opportunity to find out what I really like,” Robinson says. “I meet people from different backgrounds than me. My roommate is from Puerto Rico and speaks two languages. This is where I can make my mark. We all have the ability to make a difference in our own way.”