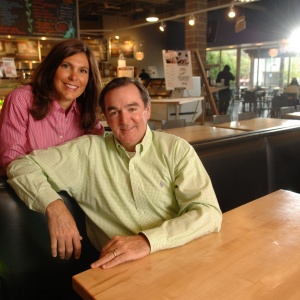 For Joe and Margaret Palmer, staying in Iowa after graduating in 1985 was an easy decision. Both of their families were here, and it was home.

What they didn’t know was, soon after graduation, they would create a well-known restaurant in Des Moines, Palmer’s Deli & Market, which would grow exponentially throughout the years.

“I saw an opportunity to expand the family business,” said Joe.

During his summers in college, Joe would head back to Urbandale to help out his family with an ice cream store they opened before starting the first Palmer’s Deli & Market in 1989.

But after graduation, Joe worked in sales and Margaret worked at Wells Fargo. The Palmers saw the appeal of creating their own business, so they decided to build upon the family deli.

“We saw a chance to go work for ourselves and saw the benefits that my folks had from that,” said Joe.
According to Margaret, Joe’s parents had already expanded the business in Urbandale three times, and wanted to open a second location in West Des Moines.

“They didn’t feel like they had the energy, whereas we did,” she said.

With their two degrees from the University of Iowa – Joe with a BBA in marketing and Margaret with a BBA in finance – they both felt capable to take on the family business.

“I think our degrees were good on both sides,” said Joe. “Margaret had the numbers down, the finance part, the banking part. I had the marketing emphasis, so I knew all about how to get the menu and the concept put together.”

With their combined effort, Margaret and Joe took Palmer’s Deli & Market to a whole new level. They increased the menu and worked on the company’s branding to create what the deli is today.

What started off as one store turned into five, and according to Joe, they aren’t finished yet. They hope to open up even more storefronts, but stay within the region.

“We loved Iowa and still do,” said Joe. “We’re Hawkeyes.”