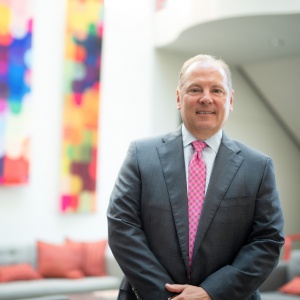 Des Moines-based Meredith Corporation is the only major magazine publisher not located in New York. Its chief financial officer, Joe Ceryanec, who earned a Bachelor of Business Administration from the University of Iowa in 1984, is a Hometown Hawkeye who built most of his career here in Iowa with the accounting firm Ernst & Young and then with McLeodUSA before joining Meredith in 2008. He was recently named "Deloitte CFO of the Year" and joined the Tippie College of Business Advisory Committee. On Jan. 31, 2018, Meredith acquired Time Inc., another large magazine publisher located in New York. We sat down with him in July 2018 to ask him: why Iowa?

You’ve worked for some major national corporations, but you’ve built your career primarily in Iowa. What kept you here?

After college, I worked in Kansas City for about eight years. I started my career with KPMG, and then moved to Ernst & Young. There was a small office in Cedar Rapids that Ernst & Young acquired and they were looking to bring in some experienced people. I was asked whether I would consider relocating. Both my wife’s and my families were in Iowa so we liked the idea of getting back closer to home. It was a good opportunity for me because at that point my career goal was to be a partner at Ernst & Young. It allowed me to move to Cedar Rapids and run the audit practice when I was in my early 30s.

I travel quite a bit for work and especially spend a lot of time in New York. I always joke that three days in New York should count as a work week because everything is simply more difficult there. Getting from Point A to Point B across the city can take you an hour or more. Coming back home is what I call “easy living.” The people are friendly, there is space to move, yet it’s vibrant. Living in Iowa provided a healthy and fulfilling environment in which to raise our family and we plan to keep our “home base” here for our children and their young families to come back to. They now also appreciate leaving the large cities where they live a for an escape to the peaceful setting they grew up in.

The acquisition of Time Inc. by Meredith was completed on January 31, but the digesting can take a while. Given your new role, you’ve been neck deep in it all. What has the last year been like for you?

It’s been a whirlwind. When we acquired them, Time Inc. was almost two times the size of Meredith whether you measure it in revenues or employees. We called it a minnow swallowing a whale. We knew that Time Inc. was going through a challenging period. Its revenue trends were well below ours and well below the industry. Our strategic imperatives were to change the trajectory of their revenues while working to get costs out of the business. Naturally when you bring two businesses together, you’re going to have duplication whether it’s the accounting department, IT, HR or other administrative functions. But not only was it running the organizations more efficiently, it was also getting those functions out of New York that don’t need to be in New York. We’re going to wind up adding 200 to 300 full-time people here in Des Moines and moving those functions out of New York.

Are those 200-300 people folks transferring from New York into Des Moines?

In most cases the answer is no. These positions end up being new jobs in Iowa. The market in Des Moines is strong, and it’s not easy finding people. Historically, we’ve looked for people with some experience, but now we’re looking to hire more directly out of college.

Meredith took on a good bit of debt to finance the purchase of Time Inc. As CFO, does that keep you up at night?

It is one of many things that keeps me up at night. [laughs] The good news is our goal by the end of our fiscal 2019 is to have paid down a billion of that debt. Between the cash we have on hand plus the proceeds of the brands we're selling, we feel good about getting $1 billion paid down fairly quickly. In our world, we talk about a leverage profile, which is your debt balance compared to your cash flow. Our goal is to get that leverage ratio below two times as quick as we can. And we’re on the right track.

The executive director of Meredith and former CEO – Stephen Lacy – is an accountant. You’re an accountant. What is it about that training that translates to business success?

I believe having an accounting or finance background is critical to running businesses now that there is such a focus on results – especially with public companies. People with experience in accounting or finance tend to understand what is driving a business, and they know how to run the business as efficiently and effectively as possible. Having that analytical background is a really good prerequisite for a CEO or CFO.

It’s more than just the analytics though. Like you mentioned earlier, it’s also the people involved.

As you rise through the ranks, being able to manage and motivate people to get things done is what allows you to continue growing in your career. There are a lot of really smart people, but they may not ever get to the c-suite because they don’t have some of those softer skills. Communication skills are a big deal – being able to speak both publicly from the podium about your company or speak internally to the team – can separate whether someone is going to continue moving up in the ranks.