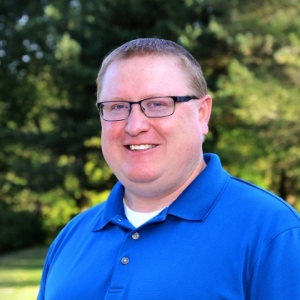 Joe Hobson graduated from the University of Iowa with a Bachelor of Applied Studies (BAS) degree in 2015, but that’s only part of the story. The bigger part of the story is about the determination it took to keep working toward a long-term goal. The definition of perseverance is steadfastness in doing something despite difficulty, and that trait has defined Hobson like no other.

Working the second shift as a Computer Numerically Controlled (CNC) programmer at American Tool and Engineering, Hobson wrote the instructions for the computing modules used to run the machines that shape and cut precision parts. He worked his way up from an entry level to management position while spending his days working on a mechanical design and drafting program at North Iowa Area Community College (NIACC) in Mason City, Iowa.

“It was a demanding program and with my work schedule I was only able to take three courses a semester,” says Hobson. “During this time my mother also lost her battle with cancer which affected my class time.”

With family commitments and a full-time position, a two and one-half year program turned into an eight-year journey. In the end, Hobson graduated with an Associate of Arts degree from NIACC in 2005. Luckily, an advisor introduced him to distance education. It was the option he needed to continue his education at the UI.

“My goal was to gain my bachelor’s degree to advance my career,” he says. “I was moving up at my current employer, but without a degree I was hitting the corporate ceiling there.”

The economy was also impacting the manufacturing industry during this period. As is the case for many non-traditional students, the stress of wondering whether he would have a job created the extra push Hobson needed to go back to school.

In order to pursue other opportunities, he required the degree to go with his experience. He also wanted to demonstrate to his children how important it was to get an education so that they would do the same when their time comes. In addition to the BAS degree, he earned a certificate in entrepreneurial management and a certificate in nonprofit management. These certificates, coupled with his BAS course work in accounting, sales, marketing, and leadership skills, helped him gain the business knowledge he needed to expand his resume.

Hobson’s hometown is Ackley, but he and his wife Jennifer and their two children have called nearby Hampton home since 2003. It was important to land a new position that would not require moving his family to another city. After completing his online degree from the UI in 2015, Hobson became an outside account representative for Vallen out of their Quad Cities location and was able to work from a home office. Vallen is an industrial distribution company that supplies metalworking, safety and maintenance, repair and operations products and solutions. Here, Hobson provides customers with their industrial supply needs to produce their products competitively and safely.

“Having my degree has helped me to understand the business climate,” Hobson says. “It has improved my leadership and organizational skills, as well as my customer interactions.”

Though Hobson doesn’t spend much time second-guessing himself, he does wish he had pursued his college education sooner.

“When I finally decided to earn my degree, I thought I was on my own to figure things out,” he says. “I wish I would have spoken to my advisors sooner to discuss my goals and find more distance and online courses to meet my needs.”

Hobson has this to say to new nontraditional students just getting started:

“Working full time in a 50-plus-hours-a-week job and taking three classes a semester is not easy,” he says. But with the encouragement of his family, he persevered.

“It was tough being a student, husband, father, and working full time, but I do not regret it for a second,” Hobson says.

Seventeen years is a long time. In the end, hard work and perseverance paid off.