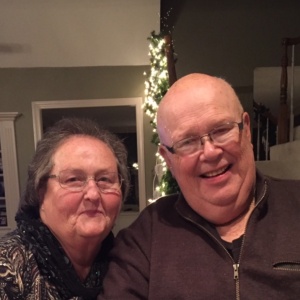 When Rex Moorman, ’30 Pharmacy Graduate, moved to Atlantic, Iowa from Clarinda and purchased and renovated a burned-out, bankrupt pharmacy in 1941, he likely could not have guessed the impact that would have on the generations to come. His son, Ken Moorman, ’63 BSPh, began working at Rex Pharmacy when he was six years old. The work that Ken did there, alongside his father and family, prompted him to attend the University of Iowa College of Pharmacy.

When Ken Moorman returned to Atlantic and Rex Pharmacy after graduating from the UI, he was happy to be providing care to his friends and neighbors. Everyone knew each other by name in the small, rural community, and he cared for patients 24 hours per day, 7 days a week.

“I remember being in the local theatre when I was called out to fill a prescription,” Ken said. “Does that happen in the big city?”

Ken started a weekly radio show to promote the family business and community events. It aired from 1963 to 2008 and was broadcasted within a 30-mile radius.

Ken retired recently after 50 years of committed, timely health care. He also gave to the community in other ways. He taught photography classes in Atlantic, in surrounding towns, and at Iowa Western Community College. He also gathered historical town photos and presented three photo albums – called the Atlantic Photo Heritage – to the Atlantic Public Library. He shared his love of photography by filming the local high school football games and the Cass County Fair. Ken credits his father for nurturing his love of photography by having a fantastic camera department in the pharmacy.

“My dad found out that he could make more money selling cameras than selling five cent ice cream cones, so Rex Pharmacy was one of the first to remove their fountains,” said Ken.

Giving back to the community was again on Ken’s mind when he spearheaded a campaign for the “Greening of Atlantic” following two years of losing the town’s fair share of trees to Dutch Elm disease. Ken and the Jaycee members planted 1,000 trees in the parking areas of the town’s streets.

The Moorman family’s Atlantic roots run almost as deep as their UI ones. Three generations of Moormans – Rex, Ken, and Ken’s daughter Ann Koeniguer, ’87 BSPh – all attended the UI College of Pharmacy, while Ken’s daughter Susan Kelly, of Florida, is a graduate of the UI College of Education. His third daughter, Sally McCarty, attended the Des Moines Area Community College, and resides in Minnesota.