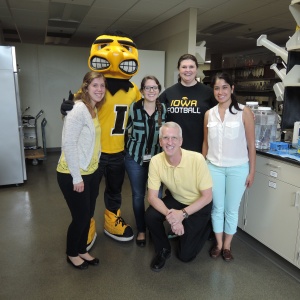 We are all as unique as our fingerprints. When squamous cell cancer of the head and neck strikes—as it does on average 51,000 times each year—we need treatments tailored for our specific genetic makeup.

Dr. Kim Brogden, PhD, professor in the University of Iowa College of Dentistry and Dental Clinics Department of Periodontics, and his research team are tackling this head-on in partnership with a precision medicine company, CellWorks, Inc., to identify the best available treatments for genetic variations of squamous cell cancers.

“CellWorks creates a data set [for each genetic variation], including each signal and cell pathway from stimulus to output, and this data set is used to create a computational model of the cell,” Brogden, director of the Iowa Institute for Oral Health Research, says. “This model can then identify how cells with different mutations respond to treatment.”

The problem, however, was that CellWorks needed to ensure that their model was accurate. That’s where the collaboration with Brogden’s lab began.

CellWorks would provide a computational model that the Brogden lab would validate. The lab would collect tumor cell lines with the same genetic makeup as the model, culture those cells, and determine whether those cells responded to treatment as predicted.

According to Dr. Shireen Vali and Taher Abbasi, the cofounders of Cellworks, Brogden’s lab work has greatly improved their model’s predications and has been “… key to establishing a precision medicine computational workflow which takes patient DNA/RNA information as inputs and personalizes treatment.”

The models were validated in 80 to 90 percent of cases, and because of this research, oncologists have a new tool for determining the best treatment for a patient based on the specific genetic makeup of the patient’s tumor, rather than using a trial-and-error method that has a success rate of only 25 percent.

“We would know which treatments are likely to be ineffective,” Brogden says. “And we can avoid subjecting patients to severe side-effects, including autoimmune diseases, inflammation, and infection. Going forward, we may even be able to prevent cancer with these models.”

The end goal is to develop a holistic system of computational models that would learn and adapt as new scientific information is added.

“We often think of science as a linear progression, but with the breadth of research being conducted today it can be hard to see science that way,” Brogden says.

The hope is that these models can help restore that linear progression, taking all of that information, organizing and making sense of it so that it can inform decision-making and clinical outcomes.

The progression of science, however, is not just about research; it also requires that we train the next generation of scientists. And that’s what Brogden is most proud of in his career. One of Brogden’s greatest accomplishments at the UI is that his students have been authors on 45 of the 68 articles he’s published during his 15 years on campus. Nine articles had four or five students as authors.

Dr. Teresa Marshall, PhD, the director of the Dental Student Research Program, speaks glowingly of Brogden’s excellence as a mentor.

“His students are well trained and function together as a team,” Marshall says, which allows them “to generate high quality research, which makes them very competitive for local and national awards,” she added.

Dr. Amber Bates and Dr. Paula Gomez Hernandez are two such students. Bates just defended her dissertation last spring after working in Brogden’s lab for five years, and she is now a postdoctoral research associate in a cancer research center at the University of Wisconsin – Madison.

“My research on head and neck cancer in Dr. Brogden’s lab is what led me to become interested in cancer research,” Bates says, “[Dr. Brogden] is the type of mentor that everyone wishes they had, but is actually quite hard to find. Dr. Brogden realizes the benefits of transferable skills and encourages his students to become effective communicators and develop a range of laboratory skills.”

“Amber Bates is a great sign of success,” Brogden says. “Sending her on to an elite cancer research center shows what an excellent researcher she’s become.”

Gomez Hernandez, now a pediatric dentistry resident at the UI, completed her Doctor of Dental Surgery (DDS) last spring and was a part of Brogden’s lab for the past four years in the Dental Student Research Program.

The program provides opportunities for students to learn about cutting-edge research in the oral sciences, so that they are able to draw on those research skills in a clinical setting. Most Iowa dental graduates end up practicing in Iowa, and this research focus ensures that graduates have the skills to learn about and evaluate new treatments and procedures so that they can always provide the best, cutting-edge care throughout their careers.

For Gomez Hernandez, Brogden’s lab has made a great difference. She plans to stay involved in cancer research as she goes on to practice pediatric dentistry.

Like Bates, Gomez Hernandez sees Brogden as a mentor far beyond the lab.

“He has taught me how to learn from every step in a research project. Even from unexpected results—to see the good that can come from even those circumstances. I think that’s made a difference for me professionally.”