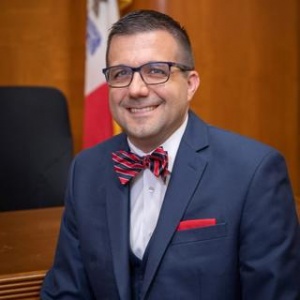 Born and raised in Jones County, Iowa, Kristofer Lyons now serves as the top prosecutor in the county, having been elected County Attorney in 2018.

“It means a lot to come back and get elected in the county I grew up in,” Lyons says.

A native of Anamosa, Lyons says he had an interest in a legal career from an early age. His mother worked as a legal secretary and her boss–an attorney and magistrate–saw something in Lyons.

“He always encouraged it,” Lyons says. “He said, ‘You have a head for this.’ It was something I always wanted to do. It just stuck.”

Lyons did mock trial in high school and went on to attend Loras College in Dubuque, where he majored in political science and minored in religious studies. After graduating from Loras in 2001, Lyons made the jump to the University of Iowa College of Law after weighing offers from Iowa and the University of Wisconsin-Madison.

It was a decision that paid off, he says.

“I’m glad I made that choice because Iowa was incredible,” Lyons says.

Lyons says the biggest impact came from working in the Indigent Defense Clinic under Professors John Allen and John Whiston.

“Doing that really gave me a passion for wanting to do trial work and making sure people are treated fairly,” he says. “It was eye opening. I got to jury try a case in law school. That was just a great experience getting to do real legal work and go to court.”

Lyons also served as a research assistant for UI Professor Sheldon Kurtz. Lyons credits the experience of working with Kurtz in helping him land a job after graduation.

That first job was a homecoming for Lyons when he joined the firm of Shimanek Shimanek & Bowman in Monticello. For 11 years, Lyons worked in private practice, although during his last two years of private practice, he also served as Assistant Jones County Attorney.

Living in small-town Iowa was important to Lyons, he says. With a wife and four children, he especially appreciates having family nearby, he says.

For three years, Lyons also served as a magistrate in Jones County and the only magistrate in the county for one of those years. As magistrate, Lyons was responsible for signing search warrants, handling simple misdemeanors, small claims and “every traffic ticket case in the county.”

“It was a chance to do something different,” he says. “I really enjoyed my service as a magistrate.”

But, when Jones County Attorney Phil Parsons decided not to seek re-election, Lyons sought a new challenge. His fellow Jones County residents elected him in the November 2018 general election.

Lyons says his time at Iowa Law “absolutely” prepared him to be county attorney.

“They gave me a great foundation with the legal clinic and the desire to go into court,” he says. “That’s certainly important when you’re county attorney. I was on the trial advocacy team. I remember my civil procedure and evidence classes and how detailed they were. I think Iowa’s academic approach to the law and how they teach it is outstanding.”