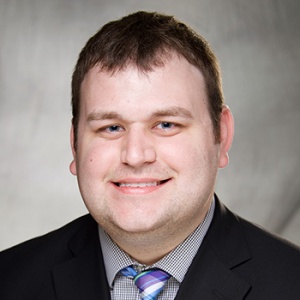 Kyle Merrill, MD, believes his involvement in student organizations outside the classroom at the University of Iowa nourished his success as a physician today. Dr. Merrill found his way to campus from Sioux City, Iowa, and has stayed in Iowa City since.

While on campus, Dr. Merrill studied chemical engineering/pre-medicine, and was a part of the Associated Residence Halls (ARH), Students to Assist Recruitment (STAR), UI Dance Marathon 15, 16, 17, and 18, and two engineering honors societies: Tau Beta Pi and Omega Chi Epsilon. He was also an orientation student advisor and resident assistant during his time as an undergraduate. When reflecting back, Dr. Merrill recalls his student leadership role on Dance Marathon’s Family Relations committee having a big impact on his life today.

“Being part of the leadership of the organization, I worked with many of the staff members in Center for Student Involvement & Leadership. I think that this allowed for a lot of personal growth, but also professional growth. With such large organizations, I had a defined role, and while I had my own tasks and goals, there was also the goals of the group, and therefore, great teamwork is key in finding success,” Merrill says.

After completing his undergraduate degree, Dr. Merrill completed medical school at the UI, and is now in his third year of pediatrics residency at the UI Hospitals and Clinics. He emphasized the teamwork skills he developed through Dance Marathon has made him a better physician.

“I truly do not know if I would be the doctor I am today without this experience, as it has played such a vital role in building my career,” he says.