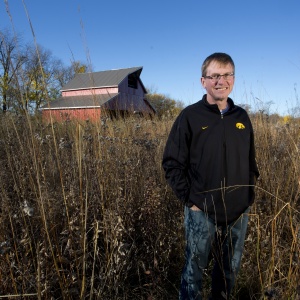 It is no exaggeration to say that water is everywhere across the state of Iowa. It allows farmers to grow crops, provides drinking water to communities, and fills–and overfills–our lakes, streams, and rivers.

As a life-long Iowan, Larry Weber, who holds the Edwin B. Green Chair in Hydraulics in the University of Iowa College of Engineering, has devoted his career to issues related to water sustainability as well as urban and rural community resilience. As a civil and environmental engineering professor, his hydrological expertise is highly-sought after by industry, state and federal agencies, and community leaders. Without a doubt, his research on river restoration, floods/droughts, and river mechanics has improved quality of life for Iowans and created a broader understanding of water quality and quantity concerns that are part of a larger global conversation.

“Growing up on my grandparents’ dairy farm drove home the importance of water to our agricultural system and our family’s livelihood,” Weber says. “Our neighbor, who owned a small construction company, was a civil engineer who graduated from the University of Iowa, and my interactions with him spurred my interest in engineering and reminds me of need to develop practical applications of the fundamental engineering principles taught at the university.”

After enrolling at the UI in 1984, Weber spent part of his time working at the IIHR – Hydroscience and Engineering Lab where he received a hands-on education that would eventually drive him to enroll in graduate school.

“I had always intended to go into industry working on construction and design, but I continuously found myself drawn to academic research, especially after working in the lab,” he says. “My faculty mentors and advisors pushed me to pursue further degrees, degrees that would allow us to develop a research program that would create technology and practices that would enhance water systems throughout Iowa and across the country.”

Weber went on to earn a master’s degree in 1990 and a doctorate in 1993, both in civil and environmental engineering and both from the UI. His post-doctoral work studied fish passage in the Columbia River Basin, and in 1996, he joined the faculty in the College of Engineering. Throughout his time at Iowa, Weber has held several administrative roles, including serving as IIHR director for 13 years, the same lab that honed his interest in water research. After the 2008 flood, Weber was instrumental in the creation of the Iowa Flood Center in 2009, as co-founder. He also co-founded the Iowa Nutrient Research Center, a partnership between the UI and Iowa State University, housed on the ISU campus. Weber also played a key role in the transition of the Iowa Geological Survey from Iowa’s Department of Natural Resources to the UI and IIHR.

Serving as a faculty leader, professor, and researcher at Iowa is not all that defines Weber. First and foremost, he is a member of the community whose work has a direct impact on those around him and his fellow Iowans. He is actively training the next generation of undergraduate and graduate researchers who will drive the global discussion around water resources and sustainability and who are committed to raising awareness of the essential nature of water in our economy and our daily lives.

“What is so important about the education I received at Iowa and the work I continue to do with students is that the fundamental engineering education provided at Iowa is translated into practical application that will impact people’s lives,” Weber says. “At many points in my career, I could have taken my education into a career in government or industry, but I believed then, as I do now, that training the next generation of scholars, advocates, and innovators while producing ground-breaking research enhances our understanding and invigorates our communities.”