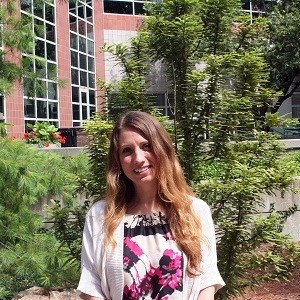 Leah Reznikov’s research project was not an easy sell to her colleagues in Professor Michael Welsh’s laboratory. Could cystic fibrosis (CF) really affect the nervous system?

“We’re all trained skeptics. Every time I would bring this up, they would say there is no nervous system phenotype,” says Reznikov.

CF is an inherited life-shortening disease that affects the lungs and digestive organs.

Still, Reznikov continued to pursue her hypothesis. After four years of research, Reznikov and her University of Iowa colleagues published a study in the Early Edition of the Proceedings of the National Academy of Sciences suggesting that the cystic fibrosis mutation affects the nervous system and might directly cause neural abnormalities experienced by some people with CF.

“I truly believe that what I found might have implications for disease.” says Reznikov.

Using a porcine (pig) model of CF, the UI team showed that the protein affected in CF, the cystic fibrosis transmembrane conductance regulator (CFTR), is expressed and functions in Schwann cells—a type of cell associated with nerves. These cells produce myelin, a fatty substance that insulates nerve fibers and allows efficient transmission of nerve signals.

The study shows that loss of the CFTR protein directly alters Schwann cell function and leads to subtle structural abnormalities in the myelin surrounding the nerve fibers. These abnormalities, although significantly milder, resemble myelin defects seen in human neuropathies.

“I was surprised by Leah’s discoveries. Her findings certainly increased my appreciation for the complexity of the disease, and they have important implications for therapeutic approaches,” says Welsh, professor of internal medicine. “I was also impressed by her creativity and insight in pursuing this research.”

Reznikov’s next step is to look for nervous system involvement in airway diseases.

“Maybe defects of the nervous system affect the size of your airway, and that might be important for obstructive airway diseases like asthma,” says Reznikov.