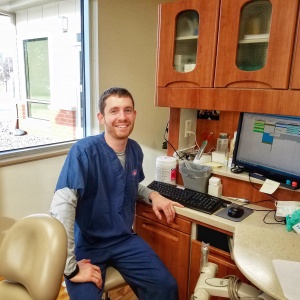 Lucas Lemburg, who graduated from the University of Iowa with a Bachelor of Science in biochemistry in 2004 and a Doctor of Dental Surgery (DDS) in 2008, is a practicing dentist at the Community Health Centers of Southeast Iowa in Columbus City, Iowa.

Since 2014, he has also served on the alumni board for the UI College of Dentistry and Dentistry Clinics, and he routinely gives his time and expertise to help support the dental profession and local communities.

As he was finishing up his dental education a little over 10 years ago, Lemburg took a six-week rotation in an extramural program at Broadlawns Medical Center in Des Moines. During his time at Broadlawns, Lemburg helped provide care in a fast-paced environment for patients of all ages, many of whom had significant financial, cultural, or language barriers that had prevent them from receiving adequate care. They often went to the medical center as a last resort.

“I gained a great deal from those experiences” Lemburg says. “My experience in that rotation was one of the primary reasons why I wanted to serve in a community health center.”

Although students learn a great deal in the college, these extramural experiences can be extremely helpful for students making the transition from dental student to having one’s own practice. Dr. Hayley Harvey (DDS ‘94) mentored Lemburg at Broadlawns, and she made a lasting impact on him. Her guidance and leadership was a key reason why he started taking on his own extramural students.

“I wanted to pass along what I had learned,” he says.

Since 2010, Lemburg has taken on an extramural student each year.

“Working in our clinic will usually be their first experience working with two or three assistants where they have to provide dental care for multiple patients at the same time” Lemburg says.

When these students have their own practice, he says, they will have to make such transitions regularly and seamlessly, and they get a little taste of that during extramural programs like the one he helps facilitate.

When he took the position at Community Health Centers of Southeast Iowa, Lemburg was the second dentist on staff. Because the flood of 2008 destroyed their facilities, he spent his first few months practicing out of an RV. When their new facility opened in 2010, Lemburg started practicing in one of the center’s three dental clinics. In 2011, he became the co-dental director of the health center, and two years later, he became its dental director.

Because of his educational and clinical experiences, Lemburg has become passionate about encouraging good preventive oral healthcare, particularly for underserved groups.

“Preventive care prevents ER visits,” Lemburg says. “Without quality preventive care, patients will be forced to rely on the ER, and for [oral-health-related] pain they are likely to receive pain medication only, and the underlying problem will remain or return shortly thereafter.”

Addressing those underlying problems through preventive care is a key objective of community health clinics, and it has become much more important as fewer private practices are accepting Medicaid patients. Lemburg indicated that this trend has created a backlog of patients at facilities like his, and it has made it hard to get new Medicaid patients in the door.

Lemburg recognizes these larger trends in the profession, partly because of his work on regional and state dental organizations. In 2011, he began serving on the Southeast District of the Iowa Dental Association. Lemburg said that serving on state and regional level dental organizations has given him a wider perspective on the profession as a whole.

“You see many things that go on behind the scenes, and you get a new appreciation for what is going on,” he says.

These larger state trends have made some of Lemburg’s other community outreach efforts all the more important. In 2009, Lemburg began performing oral-health screenings for children at local schools when Dr. William Wever, another dentist in the area, stepped away.

For Lemburg, this was one example of how important preventive care is. By teaching children and parents good oral health habits, they were able to see clear and unmistakable improvements in the general oral health of the community.

Whether it’s serving the UI, its students, the dental profession as a whole, or the local community, Lemburg is a model of what it means to give back.