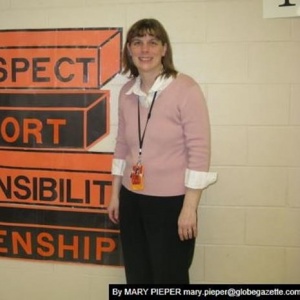 “My undergraduate work at the University of Iowa was pivotal in both my decision to become, and my development as, an educator.” DeVore says, “It was through my coursework at Iowa that I was able to pinpoint my passion area – adolescent literacy, which has grown to encompass all aspects of literacy. In my current role as an elementary principal, I often reflect on my honors coursework at the University of Iowa’s Summer Reading Clinic where my eyes were opened to the wide variety of student needs and the multiple approaches to meeting those needs in the area of literacy."

This year, DeVore, 38, a native of Lime Springs, Iowa became principal at Lincoln Elementary in Charles City, Iowa. She started her career in the Central City, Iowa School District as a reading teacher for sixth through eighth grades.

As a teacher she served on a number of different committees. She became dean of students at the middle school in 2009. She continued to teach, but also spent two or three periods a day in an administrative role, working with issues such as student discipline, attendance and academic concerns.

In 2011 DeVore transferred to Lincoln Elementary, first as dean of students and then associate principal.

"They have a lot of enthusiasm for what is going on in their classrooms and I enjoy that," she says.

To read more about Marcia DeVore’s journey to her role as principle at Lincoln Elementary we encourage you to read the original article published in the Globe Gazette.