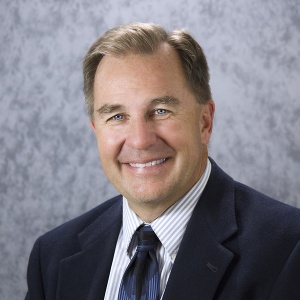 Mark Richardson enjoys the excitement of working in a field that it is continually changing and one that offers the opportunity to make a difference in his community. As President and CEO of Great River Health Systems (GRHS) in West Burlington, Iowa, Richardson’s tenure has seen the creation of more than 1,000 jobs and his organization has become the largest employer in Southeast Iowa. GRHS is a regional health system that includes a 378-bed hospital, retail pharmacies, retail medical equipment and supplies providers, and over 20 physician clinics.

A Fort Dodge native, Richardson graduated from the University of Iowa with a bachelor’s degree in business administration before completing the UI’s highly-ranked Master’s program in Hospital and Health Administration. That program is part of the UI College of Public Health’s Department of Health Management and Policy. “I knew I wanted to work in healthcare, but did not want to become a physician,” he says.

Richardson gives back to the program which he feels was instrumental in preparing him for his career and says, “My first job was a direct result of relationships that I had developed at the UI.” As a preceptor for the past 10 years, he has mentored public health graduate students in summer internships. “At least four of my interns have gone on to become hospital CEOs.”

GRHS is also a partner in the UI College of Public Health’s Former Worker Medical Screening Program (FWP), directed by UI Professor Laurence Fuortes. The FWP coordinates this U.S. Department of Energy program to provide medical screening services to workers who may be at-risk for health conditions as a result of exposure to hazardous or radioactive substances during their employment at the Iowa Army Ammunition Plant near Burlington. Richardson says, “Most former ammunition plant workers receive their medical care at GRHS.” The screenings include a chest X-ray of which GRHS provides approximately 100 per year for the FWP.

In 2014, Richardson received the Iowa Hospital Association Excellence in Leadership award which annually recognizes one individual for outstanding leadership over a career. Under Richardson’s guidance, Great River Health Systems has received national and state awards for high quality, safety, and patient and employee satisfaction.

Richardson is an active member of the Burlington community, serving on multiple boards including the United Way, The Grow Greater Burlington Economic Development Board, and the Iowa Hospital Association. He is a Rotary member, and has also coached Little League Baseball.

“As the largest employer in our area, community involvement is a definite expectation and is also a very rewarding aspect of my job,” he says. Richardson is proud to have received the 2007 Boy Scouts Distinguished Citizen Award which recognizes an individual who represents the values of Scouting in making a difference in their community.

“I have been a hospital CEO for 33 years and I can’t imagine another job that could be so self-fulfilling,” he says.