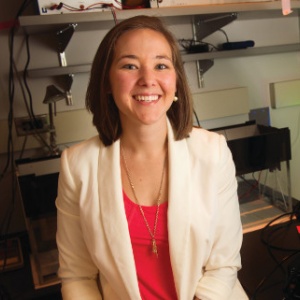 Growing up in a rural town of 2,000 in central Iowa, Mary Huff remembers supportive teachers who fostered her interest in science.

Huff is a doctoral student in psychology at the UI. Her hometown is Greenfield, located almost 60 miles southwest of Des Moines. “I didn’t know any researchers doing work similar to what I am doing now, but I was lucky to have wonderful science teachers from grade school to high school who always made learning fun and exciting,” she says.

Huff won a National Research Service Award (NRSA) from the National Institutes of Health to fund her research on the roles of different neural pathways during memory consolidation in fear conditioning. Understanding the neurobiology of memory consolidation is crucial for treating memory-related disorders and injuries, such as traumatic brain injury and Alzheimer’s.

Huff, a fourth-year scholar in the Behavioral and Cognitive Neuroscience Program, researches the basolateral amygdala (BLA), a small area of the brain that has long been implicated in disorders such as phobias and post-traumatic stress disorder.

The BLA has also been shown to modulate memory consolidation for many types of learning. This ability to influence memory consolidation is thought to be controlled through discrete pathways to distinct brain regions, including the nucleus accumbens (NA). “Even though the amygdala does a lot in terms of fear memories specifically and many memories generally, other brain regions could be processing individual aspects, such as the emotional components, of memory,” says Huff. “There are multiple parts of a memory, and it takes the brain as a whole to put it all together.”

Huff uses optogenetics on rats to isolate activity in specific neural pathways. Optogenetics allows researchers to track neural activity by using light to control neurons that have been genetically sensitized to light.

Huff’s research is fully funded through her grant from the National Research Service Awards (NRSA). NRSA grants are a highly selective source of funding for doctoral and postdoctoral trainees. The NIH’s National Institute of Mental Health awarded a two year grant of $58,838 to the UI in support of Huff ’s project. The award number F31MH105187 will cover Huff’s stipends, tuition and fees, and institutional allowance (health insurance, research supplies, etc.).

She plans to finish her doctoral degree by May 2016 and says she is in the early stages of looking for a postdoctoral fellowship.