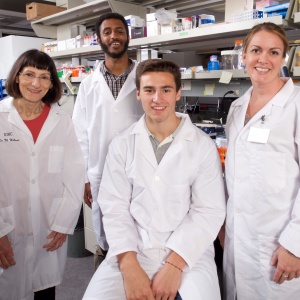 In her more than 30-year career at the University of Iowa Carver College of Medicine, Mary Wilson, MD, has made a global impact largely due to the nature of her research.

Wilson, professor in the Departments of Internal Medicine, Epidemiology, and Microbiology and Immunology, studies the pathophysiology of the insect-borne parasitic disease leishmaniasis. Millions of people around the world are currently affected by leishmaniasis. The most severe form of the disease, visceral leishmaniasis, attacks internal organs and is fatal if left untreated. An estimated 20,000 to 50,000 people die from the disease each year.

Given her unique role as one of the premier researchers in the United States and the global threat caused by the Leishmania species parasites, Wilson is regularly called upon to mentor and instruct not just physicians and researchers in this country, but those from around the world, including Brazil and India, where she participates in Tropical Medicine Research Centers that fund collaborative field studies.

“Her research, publications, and trainees are of such strength that she is internationally recognized and valued,” Patrick Schlievert, PhD, chair and department executive officer in the Department of Microbiology and Immunology, says.

Schlievert cited Wilson’s “strong track record of training and mentoring” many graduate students, postdoctoral associates, medical students, undergraduates, and visiting scientists in nominating her for one of the college’s highest honors, the Distinguished Mentor Award, which she received in 2018.

The first Carver College of Medicine Professor of Global Health, Wilson teaches in the college and serves as a staff physician at UI Hospitals & Clinics and the Veterans Affairs Medical Center in Iowa City. In 2014, she received the Regents Award for Faculty Excellence in recognition of her excellence in clinical service, teaching, and research.

Wilson’s mentorship of trainees and students is demonstrated in the lab, in the clinic, in direct classroom instruction, and in a training grant journal club that she coordinates, in which she provides thoughtful reviews of trainees’ manuscripts.

Women graduate students and postdoctoral associates are especially grateful for her guidance. Having a strong female mentor such as Wilson has been critical to the success of many women, including Nilda Rodriquez, PhD, assistant professor of biology at the University of Northern Iowa. She notes that Wilson welcomed working with young parents, especially mothers.

“Her support and inspiration allowed us to relate to Dr. Wilson and see her as a role model of how parents can become accomplished scientists,” Rodriguez says.

“I’m proud to be part of a university community that values the health of citizens around the world, and honored to contribute to the education and training of scientists and physicians in Iowa and beyond,” Wilson says of her career as a researcher, physician, educator, and mentor.