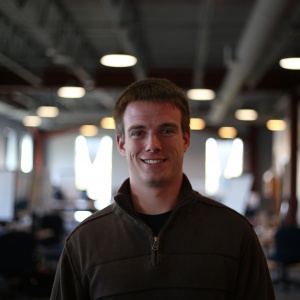 Matthew Rooda, a senior at the University of Iowa, is an exemplary Hometown Hawkeye. Last year, the Oskaloosa resident co-founded SwineTech, a business that specializes in anti-crushing technology. Each year, millions of piglets are accidentally laid on by their mothers, usually resulting in death during the first few days of life. This issue remains a pressing problem on organic and commercial farms today, and SwineTech is hoping to solve the problem permanently.

SwineTech’s growth since last year is a testament to Rooda’s passion for entrepreneurship. His consistently positive attitude, desire for knowledge, and dedication to pitch his business ideas to a variety of audiences has helped SwineTech go from an idea to a prototype. Recently, Rooda was one of five finalists who competed in the inaugural “One-in-a-Million” competition hosted by the Kauffman Foundation in Kansas City. Out of more than 375 applicants, SwineTech represented the state of Iowa and was awarded third-place overall.

In fall 2015, they took home first place at the Rose Francis Elevator Pitch Competition, and were also one of the award-winning teams who participated in the University of Iowa Venture School Student Accelerator program in the summer of 2015.

In addition to his accolades with SwineTech, Rooda has been an active participant in the John Pappajohn Entrepreneurial Center (JPEC), where he has earned the status of an Elite Founders Club member. He will obtain his BA in Enterprise Leadership in May.