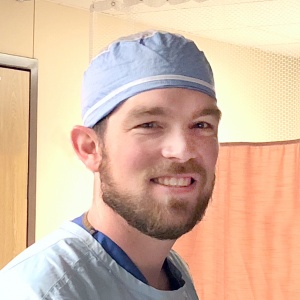 LaBelle, a University of Iowa Carver College of Medicine graduate, is a general surgeon with Gundersen Health System. He serves clinics in Decorah, West Union, Cresco, and Waukon. He and his wife, Angela, are Luther College alumni who returned to Decorah after he completed residency training in Denver. They chose Decorah because it was roughly equidistant from their families—his in Minneapolis, hers in Des Moines—and a good place to raise their five children, ages 4 to 12.

“There’s a strong sense of community here. When you have that, helping the community just comes naturally,” LaBelle says.

LaBelle mentors a student in the UI’s CCOM Rural Iowa Scholars Program, an initiative for those who intend to practice in underserved areas of Iowa. He also works with students in a rural medicine program at the University of Wisconsin School of Medicine and Public Health who do clinical rotations in his office.

LaBelle realizes these connections with medical students could encourage them to practice in rural communities, maybe even with him someday, to help ease the shortage of physicians.

“One of the things I appreciated as a medical student was having personal interactions with people who knew me, even though it was a large hospital at a large university,” he says.

“We spend a little time tying knots and a lot of time talking about life,” he says. “I’m a big believer in thinking ahead and not just letting life happen. If something is an interest to you, what kind of path do you need to go on, starting today?”

LaBelle understands the accelerated pace of change in medicine can intimidate students, but he reminds them of the constant need for compassionate care.

“You go into medicine because you have a passion to take care of people, whether that means face-to-face interactions or working behind the scenes as maybe a radiologist or a pathologist or an epidemiologist,” he says. “There will always be sick people, and they will always need someone who shows compassion—and that’s never going to change.”