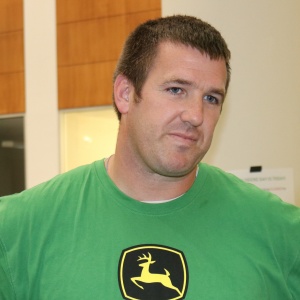 Growing up on a farm in Bankston, Iowa, Mike Elgin spent his life surrounded by John Deere equipment. From tractors to loaders to seeders, the equipment that helped run his family’s business also helped spark Elgin’s interest in engineering.

“To this day, every piece of John Deere equipment excites me,” Elgin says. “As a kid, I was in awe of these giant machines, machines that I wanted to take apart to understand how they worked.”

Elgin, now an engineering supervisor at John Deere, found that his experience on the farm would lead him into pursuing engineering at the University of Iowa, where he graduated in 2006 with Bachelor of Applied Science in mechanical engineering. It was at the College of Engineering’s career fair where Elgin was introduced to recruiters from John Deere who helped him see a professional path that would allow him to follow his dreams of working on heavy equipment at a company he and his family has come to respect so much.

“My engineering studies helped me see the value in knowing how equipment was designed and how these machines might even be designed better or more efficiently,” Elgin says.

But it wasn’t just his time in engineering classrooms and labs that defined Elgin’s university experience. Elgin played football as an offensive lineman for the UI and went on to play professional football for the New England Patriots, the New York Jets, and the Indianapolis Colts.

For Elgin, the college’s motto of “be an engineer and something more” not only applied to his time playing football at Iowa and in the NFL, but also to the way in which his teamwork with classmates, his creative approaches to problem solving, and the tight community that exists in the college made his time on campus so unique.

He remembers the college’s recruiter who met with him early on, and who he still texts today–13 years after graduation; his faculty mentors who brought him into their labs and encouraged his innovative ideas; and his peers who he studied with late into the night, even having pizzas delivered into the Seamans Center.

“We worked on some cool stuff back in those days,” Elgin says. “We did fatigue testing on mopeds, ran fuel efficiency tests on trucks with tailgates up or down, and even spent some time coding for Oreo cookies.”

The teamwork and collaboration that were a part of his time at Iowa still drive Elgin today. It wasn’t just the engineering fundamentals that have allowed him to succeed at John Deere. It was also his ability to build relationships and learn from others that have made him into the engineer he is today.

“I still come back for the college’s John Deere Day every year, so that I can help recruit the next generation of Iowa engineers who will help change the world,” Elgin says. “But I want them to understand how my broad experience at Iowa influenced me and how it can drive them to think creatively and make them more well-rounded engineers.”