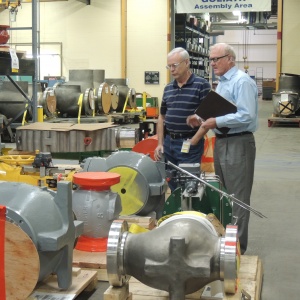 Engineering alumnus Phil Mayberry’s lessons early on as a University of Iowa student were finding ways to take the initiative to get things done, get involved, and take advantage of good networking opportunities.

“During high school, I took an aptitude test which showed a strong interest in science and math and that Engineering would be a good field of study for me. Also, I learned that Engineering graduates were in high demand and a variety of job opportunities were available,” Mayberry said.

Taking the initiative paid off well.

“I chose the UI for several reasons,” he added. “First it was near my hometown of Maquoketa and I was very familiar with the campus since I had several relatives who had previously attended Iowa, including a brother and sister. I was also a big fan of Hawkeye sports.” For Mayberry, it was also very unique that the College of Engineering accepted applicants directly into their specific engineering major (industrial and management engineering in his case).

“As a student, I tried to take advantage of all that was available on campus and rarely missed attending major Hawkeye athletic events, campus concerts, dances at the Memorial Union, special lecture series, university plays, and fraternity and sorority exchanges,” he said. He also worked in a residence hall, a fraternity house, and during the summer at the Jackson County Engineering Department to help pay for his education.

Mayberry joined Fisher Controls Company as a sales engineer upon graduation from the UI in 1967. He recently retired from Emerson Process Management in Marshalltown as Vice President, Sales-Marquee Accounts, but he continues to work part-time for Emerson as Director of Customer Events. He has been a member of the College of Engineering Advisory Board since 2000, the University of Iowa Alumni Association Board of Directors for the past six years, and a member of the Association for more than 30 years. He has had many years of involvement with the Marshall County I-Club, serving as its president for 25 years. Mayberry was named 2004 Volunteer of the Year by the National I-Club and was recently appointed to the National I-Club Board of Directors. He and his wife, Madelyn, h ave two children, daughter Christine (’95 JD) and son, Kip. Mayberry is an Old Capitol Club Silver level member of the Alumni Association.