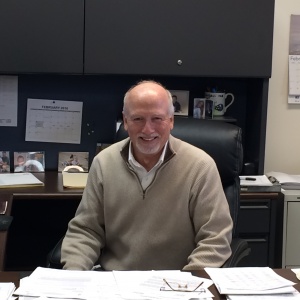 Randy Beavers, a native of Mount Pleasant, followed the Hawkeyes in the newspaper and on the radio in his youth. When it came time in high school to select a major and a college, there was no question in his mind he would be going to the University of Iowa. With his interest in math and science, Beavers’ high school advisor suggested engineering as a good “starting point” for a major.

“I recall my first semester at the UI being a challenge as much emotionally as anything in making the adjustment to college life,” Beavers said. “I tried walking on the baseball team during fall workouts, but that didn’t materialize with my class schedule. I was hearing a number of folks in my pre-engineering class talk about switching majors at the semester and I was not confident of doing well enough to make it through engineering. I got my first semester grades which reinforced I could ‘make it’ in engineering, so I decided I could stay put at least another semester.”

After surviving Thermodynamics, Differential Equations, and Physics among other required courses, the next several semesters he gained the confidence that engineering, and specifically civil engineering, was where he was meant to be.

“I was introduced to Neil Fisher, Engineering Professor and head of the University Water Treatment Plant, who provided me the opportunity to work as a weekend student operator at the plant. That experience proved to be invaluable in shaping the rest of my engineering studies and landing my first job with CH2M Hill Consulting Engineers at their home office at the time in Corvallis, OR. I was part of the early growth spurt of CH2M Hill as they were hiring many Midwest engineers after the U.S. Congress passed the Clean Water Act in 1972.”

After seven years in consulting, he was alerted to an opening at the Des Moines Water Works facility, working for another UI engineering graduate, Dr. L. D. McMullen. Beavers came home to Iowa and was fortunate to spend the next 32 years at the “Water Works” as Principal Engineer, Director of Engineering, Assistant General Manager, and CEO/General Manager.

After a very brief retirement from the Des Moines Water Works, he joined the Warren Water District, in Indianola, IA, as manager after their long-time manager retired. The three years he spent in this rural water system was equally rewarding, using his engineering expertise to manage projects, work with the Board of Directors, customers, and staff, and mentor his replacement.

Beavers is a life member of the American Water Works Association and the University of Iowa Alumni Association. He has held memberships in Iowa Engineering Society, the Des Moines Rotary and Host Lions Clubs and has been active in his church, serving 25 years on its finance council. Beavers and his wife of 43 years, Karly, have two grown daughters, and enjoy attending Hawkeye football games as season ticket holders.

“Looking back on my 42 years in the engineering profession, I can sincerely state that my UI engineering degrees (BSCE & MS) provided my family and me a career and life that I wouldn’t trade for anything.”