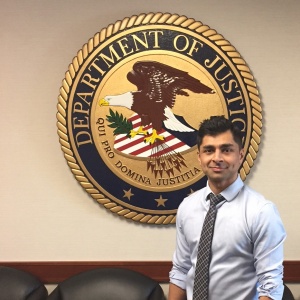 After participating in mock trial during his high school and college years, Des Moines native Ravi Narayan realized he had an interest in trial work.

“I have always enjoyed both written and oral advocacy, and the legal field was the right profession for that,” says Narayan, who graduated from the University of Iowa College of Law in 2013.

During his last two years of law school, Narayan had the opportunity to intern for the U.S. Attorney’s Office, Northern District of Iowa, where he spent between 10 and 20 hours a week getting hands-on legal experience and building contacts with professionals.

His internship began with legal research, and eventually progressed toward more advanced legal work, including writing memos, responding to habeas petitions, and preparing appellate briefs. He also assisted with trial prep and helped draft appeal briefs that were later reviewed and filed by a licensed lawyer.

When Narayan wasn’t working for the U.S. Attorney’s Office, he participated in moot court competitions and the trial advocacy program, which helped him hone many of his courtroom skills.

Last year, Narayan and one of his colleagues received a prestigious SHIELD Award from the Anti-Defamation League for their success in a complex case related to the prosecution of a Cedar Rapids man who was wanted in Rwanda for his role in the genocide against the Tutsi people.

Narayan says he feels fulfilled his role because it allows him to give back to the community in a unique way.

“One of my favorite things about this job is how often I’m in court – which isn’t common this recent out of law school,” says Narayan. “We also do a fair amount of writing in our federal cases, so the research and writing skills I picked up at Iowa Law are key. I use them every day.”