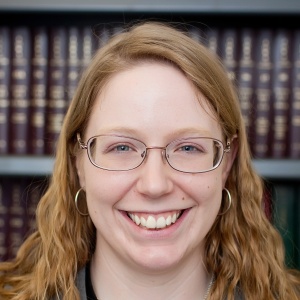 After growing up on a farm in southwest Iowa, Iowa Law alumna Sara Davenport knew she wanted to live in a smaller Iowa community after earning her J.D.

Davenport, who graduated from the University of Iowa College of Law in 2008, began her career as Assistant County Attorney in Jackson County after being encouraged to apply for the position a few months after graduation.

When the Jackson County Attorney resigned a few years later to go into private practice, Davenport was appointed to the position, which she’s grown to love.

“My goal when I started in this office was just to get some experience, but when I got here and started doing the work, I realized I really enjoyed it,” Davenport says. “Every day is different, and I feel like I make a difference.”

In a smaller community like Jackson County, Davenport says she’s had the opportunity to build a collegial relationship with her colleagues that’s centered around justice.

“It’s not always intuitive, but in some instances, a prosecutor can do more for a defendant in terms of getting justice,” says Davenport. “Once in a while I encounter a young person who is headed down the wrong path, and I have an opportunity to rehabilitate them. It sounds cheesy, but my job isn’t to win, it’s to do justice, and sometimes justice is getting someone who is spiraling out of control into treatment or into a more structured environment.”

Davenport also says she enjoys practicing in community where she has the chance to interact with those she serves outside of the courtroom.

“The people I encounter through my position are the same people I see and interact with when I’m living my life outside of the County Attorney’s Office, which makes the importance of rehabilitation hit close to home,” Davenport says “You want defendants to become more productive members of society so they can help improve the community you live in.”

Davenport says her UI College of Law education has been an invaluable asset for helping her think through cases in her current role as Jackson County Attorney.

“Iowa Law is more theoretical, and the professors do a good job of teaching you how to think through a case. I think that’s helped me as the county attorney because there are often times when I might be trying to work something out or grasp a concept and I realize I’m dealing with something I’ve learned,” she says. “Being in the real world and tackling complex issues brings many of those foundational concepts to life.”