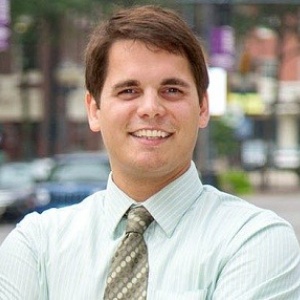 Imagine being a high school student and doing something really big. Something like producing a myolectric prosthetic hand. Or building underwater robots. Or developing a TEDx conference for young women. The type of academically rigorous project that makes your college application stand out and sets you on the road toward a high-impact career.

Thanks to Shawn Cornally, the Cedar Rapids schools are giving scores of students exactly these opportunities.

Shawn is a Cedar Rapids native who came to the University of Iowa to study in the Departments of Physics & Astronomy and Geoscience (now called Earth & Environmental Sciences) in the College of Liberal Arts & Sciences. He graduated with a B.A. degree in 2006, went on to earn his M.A. in Teaching in 2008 from the College of Education, and landed a job he loved-- teaching science at Solon High School.

While there, Shawn started exploring project-based learning, or learning through doing. Having worked with visionary teachers and researchers at the UI—building lasers, modeling atoms, programming computers—he knew that effective education is all about big ideas and innovation.

With the support of other educational innovators, he set out to put his ideas in action through creating the BIG Ideas School—a project-based learning environment where kids take the lead in proposing, designing, and executing interdisciplinary projects with real-life impact in the community and world around them. He knew that such an education can change a young person’s life. “For many kids, taking ownership of your learning is the difference between dropping out and graduating,” Shawn says.

BIG Ideas attracted the attention of the Cedar Rapids Community School District, which integrated the program into its schools in 2013. Since then, more than 30 students of all socioeconomic backgrounds have completed the program, along with their more traditional schooling, and Shawn hopes to ramp it up to work with hundreds more in coming years.

Shawn attributes his drive to innovate to his UI education. “Without the UI, there would be no BIG. I would never have had the knowledge or wherewithal or guts to do this,” Shawn says. “I had powerful experiences there that I never would have had anywhere else.”