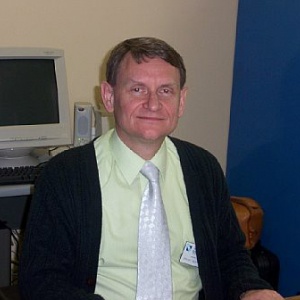 Nearly a decade into his career, Steven Faulkner faced the reality that he would no longer be able to practice dentistry in Cedar County due to his progressive blindness.

Instead of accepting this as a defeat, Faulkner strengthened his resolve and went back to the University of Iowa, his dentistry alma mater, this time at the College of Education. He earned a Master’s Degree in Rehabilitation Counseling at the UI College of Education, graduating in December of 1988.

“The people I was in classes with were all very supportive and counseling-type people,” Faulkner says. “It was an unexpected pleasure to be encouraged along the way. The professors there were encouraging and that meant a lot to me.”

“I take this work very personally because I went through the public vocational rehabilitation program in order to move on with life after blindness,” says Faulkner. “Through my rehabilitation plan with the Iowa Department for the Blind, and my training at the U of I, I was able to gain the skills and confidence to be employed in a great career. I felt very alone as I was going blind as a dentist. I wanted to be the guy that helped people.”

Later, Faulkner would go on to serve IVRS clients at their North Iowa Area Community College office, where he felt good about becoming part of the college environment. Since 2001, he has been a supervisor of a group of rehabilitation professionals at the IVRS Mason City Area Office.

“I want to teach them the importance of the counseling process in rehabilitation, and the tremendous opportunity that VR counselors have to impact the lives of our friends and neighbors who have disabilities and want to work” Faulkner says. “I find the ability to make a difference very rewarding.”