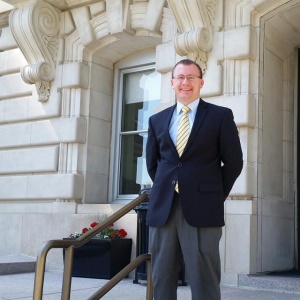 With multiple advanced degrees and a tenure-track position, Thomas Laehn was on target for a successful career in academia during his 20s.

But just a few years after accepting a faculty position at McNeese State University in Louisiana at age 27, Laehn says he knew he didn’t want to “plateau” too early in life. He decided to apply to law school at the University of Iowa so he could return to his home state, where he knew there was a shortage of attorneys in rural areas.

“If I had received tenure, I never would have given up that job. I would have been there the rest of my life,” Laehn says affectionately about his teaching career at McNeese State University. “I knew I wanted to get back to rural Iowa, and, at some point, get married and have kids and give them a similar upbringing to what I had. I like the small-community values, neighborliness, and hospitality that Iowa has to offer.”

The stars aligned, and Laehn was accepted to the UI, where he says his education allowed him to broaden his expertise—a welcome change after specializing in increasingly narrow topics pertaining to ancient political thought during his studies as a graduate student.

“Law school is different from graduate school in that during graduate school you go through a process of narrow focus and specialization. But as a lawyer, a person learns to become a jack of all trades,” Laehn says. “You learn different ways of thinking and develop certain skills that can be translated into all different parts of the law.”

During his first summer of law school, Laehn spent a month in Beijing, where he took a class on the Chinese legal system at Peking University, and returned to Iowa to clerk for District Court Judge William Ostlund.

“It really exposed me to state law and the way a state judge thinks and acts. I sat in on my first trial, and it was a fantastic experience,” Laehn says.

During his second summer, Laehn was offered a summer associate position at Skadden, Arps, Slate, Meagher & Flom in New York City, where he conducted legal research to compose arguments and analyses for various cases; he also did pro bono work.

Laehn graduated from the UI College of Law in May 2017. And even though he had two job offers at the beginning of the academic year—one with a large law firm in New York, and one as an assistant county attorney in Greene County, Iowa—he followed through with his plans to stay in state.

“It really goes back to the judge for whom I clerked,” says Laehn. “He is based in Greene County, so I had the opportunity to meet members of the board of supervisors and various officials during the course of that summer when they happened to be looking for an assistant county attorney. It really worked out well.”

During his first year as the assistant county attorney Laehn has already led the prosecution of a large number of criminal cases and has assisted county officials with a wide array of legal questions.

The location of the position has also given him an opportunity to teach as an adjunct instructor at nearby Drake University in Des Moines.

“Iowa is where I want to be. It’s exactly what I wanted. When I came to Iowa Law, I knew I wanted to end up in a county attorney’s office; I just didn’t think it was feasible,” Laehn says. “I thought I would go to Iowa Law and then go into private practice, and an opportunity might arise sometime down the line. I never thought it would happen immediately after law school.”

Laehn says he plans to run for the office of Greene County Attorney this November.