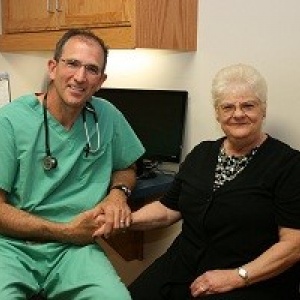 As the 1980s farm crisis rolled across America, Tim Breon was planning his future. He wanted to continue his family’s legacy of farming in rural Iowa, but tough times caused him to change course, earn a bachelor’s degree in animal science at Iowa State University, and consider becoming a veterinarian—until his mentors nudged him down another path: medical school.

“I didn’t know anything about medical school, about what you had to do to become a physician, but when I walked out of my adviser’s office that day I decided that’s what I was going to do,” he says.

At the University of Iowa, he obtained a master’s degree in preventive medicine and occupational health, with an emphasis in rural/agricultural health, and then earned his medical degree. After completing a general surgery residency in Ohio, he returned to Iowa to join Mahaska Health Partnership in Oskaloosa—about 25 miles from where he grew up north of Ottumwa. He works at the same hospital that has treated generations of his family, including his grandfather, who died in a tractor accident when Breon was 7.

As a general surgeon, Breon performs a wide range of procedures. His patients are independent, resourceful rural Iowans used to fixing problems on their own, so by the time they see a doctor, they may have multiple concerns needing attention. Many lack convenient access to affordable health care. Often his elderly patients can’t travel far for care because they don’t drive or they have limited transportation options.

“If we couldn’t provide basic surgical procedures for these people, they would have no opportunity to get care in their home community,” he says.

As a UI medical student, Breon was given the opportunity to travel Iowa and interview general surgeons. He learned what rural communities need and started thinking about how to help alleviate the shortage of small-town general surgeons. Today, Breon welcomes high school, undergraduate, and medical school students to Mahaska Health Partnership, offering insight on life as a rural general surgeon. He mentors a student in the UI Carver College of Medicine’s Rural Iowa Scholars Program (CRISP), an initiative for students who intend to practice in underserved areas of Iowa.

“CRISP is recreating the path I took,” Breon says. “It’s an excellent way to provide something that happened to me spontaneously. Everybody I met was a mentor who stimulated interests I had when I was at the university.”